The BLOOD AND ROSES Mystery Explained 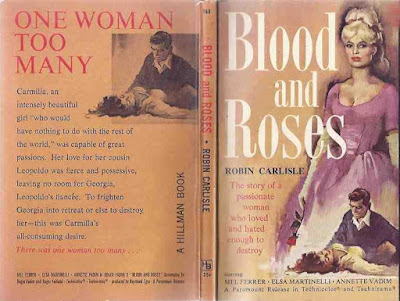 Last week, I was surprised to discover that - in addition to such horror hits of the early 1960s as KONGA, REPTILICUS and BRIDES OF DRACULA - Roger Vadim's BLOOD AND ROSES had been the subject of a movie tie-in novelization.

Such a venture seems a bit redundant, as BLOOD AND ROSES was at least theoretically based on J. Sheridan Le Fanu's 1872 novella CARMILLA, which might just as easily have been printed between these soft covers. Instead, the job of translating Vadim and Roger Vailland's screenplay* into prose fell to someone credited as Robin Carlisle. The name might well be a pseudonym, as no other publishing credits could be located for this writer. Their work, certainly for hire, was copyrighted in 1960 by Paramount Pictures Corporation and published by Hillman Books, a subsidiary of Hillman Periodicals Inc. that same year, several months to a full year before the release of the film in North America. The only personal note left by the author is his/her dedication "To R.M., who knows why." (*Newspaper reports from January 1960 credit Peter Viertel as a contributor to the screenplay.)

One thing known to collectors of movie novelizations is that - because they require a certain amount of lead time to write, and are generally undertaken before the film in question has arrived at a final cut - such books habitually contain scenes, dialogue, even entire characters nowhere to be found in the movies they are associated with.

When I first learned of this book's existence, my first reaction was to bring it to the attention of John-Paul Checkett, whose two-part coverage of Le Fanu's CARMILLA and its many film adaptations (including BLOOD AND ROSES) appears in VIDEO WATCHDOG 183 and the forthcoming 184. I thought he would find its redundancy amusing. Then it struck me that there was something potentially far more attractive about the book than mere irony. For the past 56 years, there has been a mystery associated with this film that its novelization - I realized - stood a good chance of clearing up. 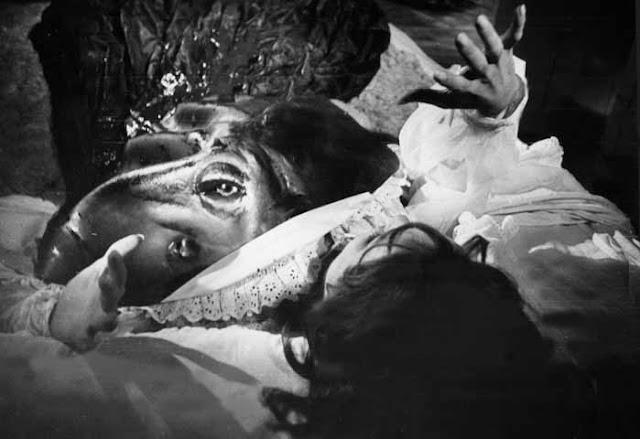 Said mystery concerns the above photograph, which was part of Paramount's original promotional stills set for the picture. It pictures some kind of amorphous blob with eyes creeping up the night dress of a brunette, who could only be Georgia, the secondary female lead played in the picture by Elsa Martinelli. However, no such scene appears in the film.

I've long felt that such a bizarre image could only belong in the film's delirious dream sequence, which occurs quite late in the film. The sequence plays a bit choppily in the both the European cut (available on German DVD as ... Und vor Lust zu Sterben, which I covered at some length in VIDEO WATCHDOG # 177) and the substantially different US cut - which, surprisingly for an American studio release of 1960 forbidden to no particular age group, contains some female nudity.

I promptly ordered one of the few affordable copies of the paperback left at abebooks.com. (I'm afraid the only copy remaining there now is going - or staying - for $75!) My purchase arrived today - and I'm delighted to report that the mystery of this image is indeed solved in Chapter Nineteen, on pages 137 and 138.

As John-Paul Checkett describes in his detailed description of Le Fanu's original tale, CARMILLA reaches a climax of illumination in a scene where the General Spielsdorf secrets himself inside the bedroom of his niece Bertha to determine the secret cause of the lethargy that has beset her since the arrival of their house guest, Millarca. There he witnesses Millarca (who is, in fact, the vampiric Carmilla Karnstein) steal inside his niece's bed chamber, where to his astonishment she metamorphoses into a cat, creeping up Bertha's nightclothes to feed upon her life's blood. The monster we see in this production photograph - which looks to me like an early work of Carlo Rambaldi, quite possible as Vadim's film was produced in Italy - serves as a Lovecraftian metaphor of this cat and, indeed, the evil essence of the vampiric ancestor Mircalla Karnstein that is possessing Carmilla.

In Vadim's film as it presentlystands, Georgia rouses from her lethargy to discover Carmilla (Annette Stroyberg Vadim) standing at the foot of her bed as the film itself drains of all color. Color, in the form of red blood, then begins to seep from Carmilla's monochromatic form, from both her throat and her heart. The blood assumes an unseen living form that Georgia touches, transporting her into the surreal dream that embodies the film's climax. The dream itself is in black-and-white with only red objects represented in color - like the surgical gloves in the operating theater scene where a topless female patient is spread-eagled on a table, her identity obscured by a towel. The novelization makes sense of this mystery, as well.

In the book, Carmilla waits for the men in the villa to slumber until she goes to Georgia's room. When Georgia rouses from her languors, it is not the image of Carmilla that she sees at the foot of her bed.
Here is the relevant text from the novelization by Robin Carlisle:

Georgia wakened with a violent start. The daze that had engulfed her all that day in bed was completely gone, and her mind felt crystal-clear and alert. Pervading her, however, was a sharp sensation of fear. She could not imagine what caused it, but she had the impression it was the fear that had wakened her so suddenly. Perhaps, also, it was the fear that had cleared her head. She lay there staring at the foot of her bed, wondering how she would sleep away the rest of the night in this funny mood.


A wide, flat, wet-skinned creature, very black in color, appeared over the bottom edge of the bed and began slowly to creep up over her feet. It watched her with two elongated eyes. Moving in waves like a snail it came on so gradually that for a long minute she took it rather calmly. Then she became aware that she could not move her feet. The monster had crawled over them – they seemed paralyzed. The odd fear she had been feeling suddenly focused on this apparition. It was as though her fear had been waiting for its arrival. She wanted desperately to cry out but the cry choked in her throat. She could not make a sound.


The monster was now up to her knees. It felt like a very warm, very heavy blanket. With an enormous effort she pulled her legs up to her chest and pressed herself up against the backboard of the bed. She felt curiously helpless and lethargic. As it came closer, she saw that it was really a dark green, not black at all.


There was a tapping at the window the distracted her for a moment. In the water outside the window she caught sight of Lisa swimming, her hair trailing about her head like seaweed. Lisa tapped at the window to get Georgia's attention. She pointed to the monster and urgently beckoned her to get out of bed.


The dark green horror was now only inches away from her.


It was almost touching her.


With the jolting start Georgia wrenched yourself free of its spell and fled to the window and opened it. Lisa reached her hand out of the water that flowed by across the face of the window and took Georgia by the wrist. She pulled her out through the window into the water with her. It was cool and pleasant, the water, and easy to move about in.

That is all we get of the monster. Lisa, the young girl killed earlier in the film by Carmilla, guides Georgia to the operating theater, where Carmilla appears dressed as the chief surgeon. The topless patient is meant to be Georgia, who greets Carmilla warmly. However, Carmilla denies her identity and removes her surgical mask to prove the point, revealing a face that has begun to yellow and shrivel with age.

The crone that was Carmilla then poises her scalpel over Georgia's neck and plunges it in, sawing away at her tender flesh as the operating theater begins to spin vertiginously in a flourish of horror. Georgia screams at the horrid yellow face, the violence of the surgery against her, and the spinning room, crying out "Darling! Darling! Darling!" - until she recovers to find herself in the arms of her fiancé, Carmilla's beloved Leopoldo.

Thus the sequence is not really a nightmare at all, as it seems in the two extant versions of the film, but rather a visual metaphor for the metaphysical transposition of souls that takes place as the Mircalla possessing Carmilla trades souls with Georgia. The lingering questions are 1) was this just a dream? and 2) is this transposition successful? If so, it would mean that when Carmilla dies in the subsequent scene by falling onto the spike of a fence in the fields, she is not Carmilla at all, but rather Georgia. It is worth mentioning that the novelization contains no final scene aboard the jet, as we get in the US release, in which a voice-over by a triumphant Mircalla informs us that she has quietly taken possession of Georgia's body. 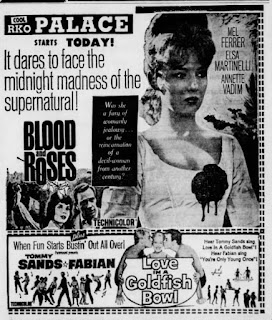 What all this conflicting information suggests is this: at some point during the editing of BLOOD AND ROSES, Vadim must come to the conclusion that including graphic horror imagery in his film would make it more difficult to rationalize on the adult art-house circuit. I doubt this would have been Paramount's concern, though they may well have had problems with the otherwise oblique lesbian aspects of the Carmilla/Georgia relationship becoming more obvious with a declaration of love, not to mention the breast nudity of Elsa Martinelli. It is also possible that the most horrific material was only shot to appease Vadim's producers, who may have had to real intention of using it - but it cuts a bit too deeply into the meaning of the scenes in which these things appear, so it's my feeling that, when Vadim saw the material cut together, he decided that his picture would be better served by leaving certain questions unanswered, to err on the side of ambiguity.

The film premiered in Paris in September 1960 and finally opened in America one year later, in the first week of September 1961. For further reading on the subject, I direct you to my detailed review of the German import DVD in VIDEO WATCHDOG # 177.