Aboard the Love Boat with VOODOO BLACK EXORCIST 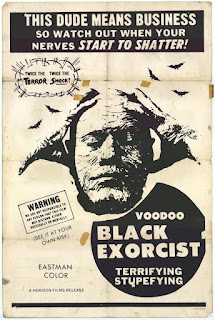 Manuel Caño's VOODOO BLACK EXORCIST (Vudú Sangrienta, 1974) was not blessed in many ways, but it was blessed with an aggressively exploitative poster for its US release. It's the kind of poster that excites me on sight: no color, incoherent graphics (Bats? Why bats?), non sequitur promises in place of actual information ("Twice the TERROR! Twice the SHOCK!" - but compared to what?), a title patched together from buzz words ripped from the box office zeitgeist; it appears to have been designed on a one-hour deadline dare by someone close to suffering a nervous breakdown. Somehow the poster has always proposed to me a film better left to the imagination than to actually see, and I missed seeing it, or even finding out much about it, till this past weekend - when I was astounded to discover that the mummy pictured on the poster, evidently seized by a migraine, is none other than Italian Western legend Aldo Sambrell. As one watches the film, one must fight the supposition that the only reason the producers went with big, strapping, stocky Aldo is that Paul Naschy was for some reason unavailable.

In all fairness, Sambrell gives his all, even shaving his head for the role of Gatenabo, a black Caribbean voodoo priest who - with his forbidden love Kenya (Tanyeka Stadler, also white and playing black - in fact, they both look covered in mud) - was killed in a voodoo ceremony 3000 years ago, mummified and placed in a sarcophagus. (The ceremony is all percussion, with Hendrix-like electric guitar squalling added to the music in post-production. To keep things more within the 1000 B.C. time frame, we suppose.) When the sarcophagus is unearthed and shipped back to civilization aboard a luxury ocean liner, Gatenabo reanimates - now looking distinctly Caucasian - and discovers Kenya to be reborn as another passenger aboard ship, Sylvia (Eva León - who also gives her all; it's not every actress who would consent to bare all for a bubble bath scene in VOODOO BLACK EXORCIST). Among the highlights: Gatenabo presenting to a sleeping Sylvia the decapitated head of a past-life assailant; someone defending himself against the muddy-looking mummy by turning a fire hose on him, revealing bare legs under his priestly robes that don't look mummified in the least; and the murder of a character in front of a mirror, which unashamedly captures the hand-held camera's operator in full view of the action. The film's action nevert quite lives up to the poster's promise of "terrifying," but the English dubbing, if anything, surpasses the poster's promise of "stupefying."

Like this:
Sylvia: "According to the voodoo religion, when a man dies, he turns into eternal particles."

Or this:
Inspector Dominguez (Fernando Sancho): "You see, I have a system. When I don't have a lead, I drink gin - and wait."

Or this:
Dr. Kessling (Alfredo Mayo): "Just think of it! That same rhythm was sounding thousands of years ago in the jungles of Nigeria! And the movements of that dancer are an actual copy of ancient ancestral dances!"

Busybody dowager (Maria Antonia del Rio): "What do they signify?"

Dr. Kessling: "Your head will burn and your body will dissolve into nothingness."

Or this:
Insp. Dominguez: "Do you know how to use this?"

Insp. Dominguez: "Do you know what a mummy is, my son?"

Insp. Dominguez: "At first, you will think it's a human being like you or me. But later, you will realize it's not, and that's when you will tremble."

Insp. Dominguez: "And that is the time you will have to pull the trigger. Hurry, hurry!"

With its embarrassing dearth of genuine black protagonists and absence of any exorcist or exorcisms, VOODOO BLACK EXORCIST is at least good for a few laughs, even if they are partly at our own expense as its trusting viewers. Unfortunately it presently circulates only as a scratchy 4:3 reduction of its original 2.35:1 screen ratio, but what survives of it visually is at least colorful and crudely interesting. The score by Fernando Garcia Portillo (whose other credits include the remarkably scored WITCHES MOUNTAIN and a couple of Jess Franco films, including DR ORLOFF'S MONSTER) is quite good, in a Euro garage band sort of way. A few years prior to this enjoyable misadventure, Manuel Caño and screenwriter Santiago Moncada served as prime movers on the project that became Mario Bava's HATCHET FOR THE HONEYMOON (1970). If nothing else, VOODOO BLACK EXORCIST shows exactly how much any film project stood to gain by having Bava at its helm.

If I have succeeded in intriguing you, you too can see VOODOO BLACK EXORCIST as a free Amazon Prime viewing option, or as a public domain DVD release from this company, this company or this company (a purported "digital remaster"), to name a few.