It is fairly well known that Judy Garland was not MGM's first choice to star as Dorothy Gale in 1939's THE WIZARD OF OZ. They wanted Shirley Temple. I've sometimes pondered how different a film this beloved classic might have been with proud and pouty little Shirley leading its dances down the Yellow Brick Road, and have always thought that, while she probably could have played some scenes better than Judy did, it ultimately comes down to who could have better sold "Over the Rainbow" - and, of that, there's no question.

However, in the course of last night's random relaxation viewing, I found myself face-to-face with the ultimate reason why Shirley Temple didn't have to make THE WIZARD OF OZ. Simply put, she had already told that story at least once before - when Allan Dwan directed her in HEIDI (1937), based on Johanna Spyri's classic book.
In the early 1960s, HEIDI had been my introduction to Shirley Temple and one of the earliest movies to bait me with the similarities of a young protagonist's plight to my own. My own story was much like that of Heidi, who was placed in the care of a grandparent for reasons obscure to her, only to be plucked away again once she finally settled into some semblance of hearth and home, and placed with a foster family in whose care she was not entirely safe. It was in such a home that I first saw HEIDI on Channel 12's "Early Home Theater" circa 1962; it rolled around often and I watched it every time. Its story teased me cruelly but it was always worth it to reach its happy ending, which took Heidi back to her grandfather (Jean Hersholt).

Revisiting HEIDI, it is easy to see why MGM initially wanted Shirley Temple: she had already told a very similar story very well! In both films, a little girl (presumably orphaned) lives with elderly relatives until the machinations of an evil spinster leads to her being removed from her home and placed with a different family of sorts. In both cases, this family is distinguished by disability, an absent father figure, and a looming evil female driven by personal ambition. While Dorothy finds herself giving hope to a scarecrow without a brain, a tin man without a heart, and a lion sans courage, Heidi is placed as a chipper companion to Klara (Marcia Mae Jones), who is wheelchair-bound.

Klara's businessman father Herr Sesemann (Sidney Blackmer) travels a lot, leaving her in the care of the aptly-named Fraulein Rottenmeier (Mary Nash), a strict and creepy spinster who secretly aspires to become the lady of the house.

The similarities between the two films becomes still more blatant when, on Christmas Eve, Heidi is given a snow globe containing a serendipitous likeness of her grandfather's farmhouse with a miniature old man outside it, leaning into the harsh weather while carrying a bundle on his back - providing the child with a visual connection to the life stolen from her. This scene evokes the same emotions as when Dorothy uses the crystal ball in the Wicked Witch's dungeon to summon a sepia image of her Auntie Em. Due to the spitefulness of the witchy Fraulein Rottenmeier, Heidi's snow globe is smashed - a traumatic moment mirroring the shock when Auntie Em's cries are suddenly replaced and mocked by those of the Witch. 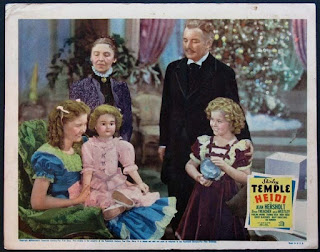 Both films also feature climaxes in which, after the young protagonist proves successful at helping her companion(s) to become whole, she falls into the clutches of the established villainess and having to escape her domain. And though Heidi and Dorothy are separated from their respective farms by a different sort of distance, both films end with the two girls back at home. Much as Dorothy recognizes her Oz companions in her aunt and uncle's farmhands, Heidi returns to her grandfather's farm only to discover that the local parson and lovely parishioner whom she has always mistaken for a couple have finally become one.
As you see, there is quite a lot to connect the two films - and I haven't even mentioned the Munchkin-like costume that Shirley wears in HEIDI's musical number "In Our Little Wooden Shoes", or the costumed monkey that comes in through the Sesemanns' town house window!