In Search of Lost Chords 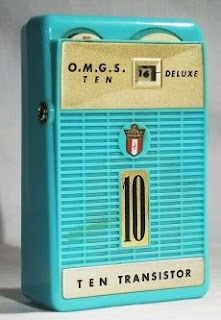 This picture shows the kind of transistor radio I owned between 1963 and 1965, when popular music (IMO) was at its zenith. It was a gift from my mother and it became my Siamese twin; I carried it with me everywhere in a cheap black leatherette carrying case, and I often fell asleep listening to it - in the dark of my room, where music seemed to gather extra dimensions it never had in broad daylight.

Sometimes I was able to put it down for awhile, to go to the movies or whatever, but when I first heard (for example) The Zombies' "She's Not There" or "Tell Her No," or "You Really Got Me" by The Kinks, I was so thunderstruck by a new musical world suddenly defined but as yet unmemorized, that I would stay tuned not only to listen but to stand guard till the next time those songs cycled around. One day, when I was walking around my West Norwood neighborhood with my radio at my side, I was momentarily careless and dropped it - and that was all she sang.

I can't remember what I did for music from 1966 through maybe 1968, other than overhear it on other people's radios or to play something on the occasional juke box. I've sometimes thought of trying to find one of these, to fill a certain nostalgic void, but I couldn't bear to hear today's music coming out of it.
Posted by Tim Lucas at Saturday, August 20, 2016