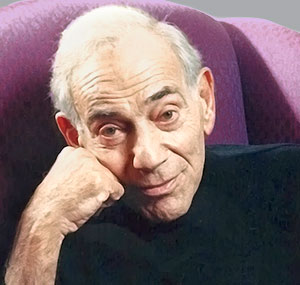 Next month, on October 24, Arrow Video will be releasing THE HERSCHELL GORDON LEWIS FEAST, a deluxe box set composed of 14 films by Florida's own "Godfather of Gore" on Blu-ray and DVD, including nine that will be making their high-definition debuts. The career retrospective proposed by this set took on new dimensions earlier today with the announcement that Herschell Gordon Lewis won't be seeing this grand summation of his efforts. He died today at the age of 87. (Added 9/27/2016: Lisa Petrucci of Something Weird Video has subsequently announced that Herschell was in fact 90 at the time of his passing, born in 1926.)

Best remembered for inaugurating the American gore film in 1963 with BLOOD FEAST, Lewis was a trailblazer in all manner of exploitation cinema; it would not be wrong to suggest that his taboo-breaking innovations in horror had been grounded in his earlier nudie and sexploitation films, which taught him that - since he was working without much in the way of talent or funding (as he freely admitted) - his greatest commercial advantage was making product for adults only. For many years after their initial release, his notorious double feature of BLOOD FEAST and TWO THOUSAND MANIACS!, having become next to impossible to see, literally became the stuff of legend - talked about far more than they could be seen. It was not until the early 1980s that this began to change. To quote director Frank Henenlotter, interviewed in the RE/SEARCH book INCREDIBLY STRANGE FILMS:

"I didn't want anything to do with videotape when it first came out: the only films that were available were SOUND OF MUSIC and HELLO, DOLLY! - give me a break! But once you saw BLOOD FEAST being sold, that's when you knew: uh-oh, here it comes. That's when everybody I knew had to rush out and buy a VCR." 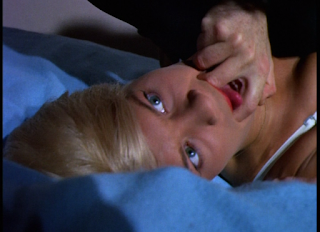 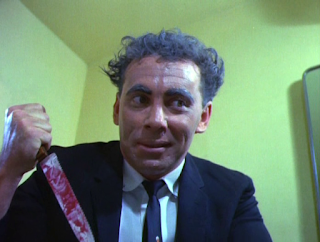 Adding to that imperative, surely, were the serendipitous arrival of two 1983 books: Michael J. Weldon's THE PSYCHOTRONIC ENCYCLOPEDIA OF FILM and John McCarty and Daniel Krogh's THE AMAZING HERSCHELL GORDON LEWIS AND HIS WORLD OF EXPLOITATION FILMS. The latter took horror fans for the first time beyond Lewis' best-known work to into his pseudonymous work on sexploitation from nudie-cuties like BOING-G-G-G-G! to hardcore films like BLACK LOVE, his film doctoring on other people's projects like MONSTER-A-GO-GO and THE PSYCHIC, and detailed looks at then-obscure titles like his LSD picture SOMETHING WEIRD, his epic Dracula story A TASTE OF BLOOD, and the alternately hellish and hilarious THE GORE-GORE GIRLS. Cult Video and Midnight Video released several Lewis titles, but it took Mike Vraney's Something Weird Video to recover the greater breadth of Lewis' work and redirect profits to him that had otherwise been long since surrendered or lost. Working with Jimmy Maslon and Henenlotter, Vraney also managed to uncover the outtakes of Lewis' films, something no one ever expected to see - which repositioned the historical yardstick in terms of deciding where truly adult imagery in American horror cinema really began. My point being that Lewis was always central to the sociological force that made the whole home video movement catch fire. 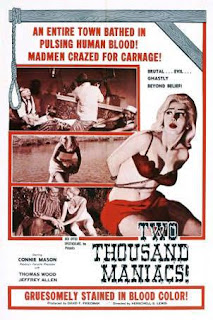 While the work of others consigned to his general ballpark of production (Ed Wood, for example) hasn't shown the necessary depth to accrue interest with the passing of time, something about Lewis' gritty, silly, sometimes angry work continues to tighten its hold on the fascinated and appalled imagination. Regardless of their rough edges (and they are plentiful with their clashing colors, mechanical cinematography and toothache performances), Lewis' films had the significant advantage of being made in the midst of the 20th Century's most dazzling decade. Consequently, they possess a certain value as retorts to such 1960s topics as nudism (pornography (SCUM OF THE EARTH), Deep South separatism (TWO THOUSAND MANIACS! presents an extreme South so separate from the rest of the country that it comes and goes from reality like the ghost village in BRIGADOON!), the Pill (THE GIRL, THE BODY AND THE PILL), LSD (SOMETHING WEIRD), bikers (SHE DEVILS ON WHEELS), swingers (SUBURBAN ROULETTE), automation (HOW TO MAKE A DOLL), juvenile delinquency (JUST FOR THE HELL OF IT), sexual liberation (THE ALLEY TRAMP), and political corruption (THE YEAR OF THE YAHOO!). His extreme gore film THE WIZARD OF GORE (1970), remade in 2007, even dabbled in Pirandellian illusion and subjective reality. Remarkably, of the 37 films that credit him or his screen names as director, the IMDb lists him as having produced 24, acted in and written 23, photographed 20, and provided the scores for 11 - which, like his work or not, validates him as one of our last "complete" filmmakers. He seems to have done everything but edit them, but I'll bet he had a hand in that, too.
Lewis retired from filmmaking in the early 1970s to make his fortune as a guru of advertising and direct marketing - lecturing, writing books, working on his tan, living the good life. Then, mostly as a gesture of largesse for his fans, he returned to directing in the early years of the new century with a new BLOOD FEAST sequel and THE UH-OH SHOW, while his long-promised project GRIM FAIRY TALES ultimately failed to materialize. Predictably, lightning did not strike twice with any of these, but it was not really expected to do so; these projects were offered in the spirit of thanks for remembering, and caring. He loved his fans and went out of his way to meet with them at movie conventions, never charging for his autograph. In 2010, Maslon and Henenlotter co-directed HERSCHELL GORDON LEWIS: THE GODFATHER OF GORE, a documentary covering Lewis' entire career as the most carnal of cinematic carnies. The IMDb lists as his final project HERSCHELL GORDON LEWIS' BLOOD MANIA, an anthology film "now in post-production" co-directed by Lewis, Kevin Littlelight and Melanie Reinbolt. Herschell and I had a few occasions to communicate over the years, both in response to VIDEO WATCHDOG's coverage of his work and to commiserate over the passing of mutual friends. He may have made some of the most tasteless films ever to come down the pike, but he was a real gent. I'm sorry we've lost him.