Review: THE RETURN OF DRACULA

THE RETURN OF DRACULA (1958), directed by Paul Landres and scripted by Pat Fielder, was very likely the first Dracula film I ever saw. It was a staple of Channel 12's EARLY HOME THEATER, which ran Monday through Friday here in Cincinnati at 3:30pm, thus coinciding perfectly with the end of the school day at 3:10. It played so often, I must have seen it a few times before 1965 rolled around - before my first exposures to the Universal or Hammer Dracula films. Being introduced to the film under these circumstances meant that I grew up ignorant of its true historical moment and context, and that I have overlooked its deserved place in horror film history for most of my life. However, while revisiting the film courtesy of Olive Films' new Blu-ray release, much of its real value snapped into focus.

It's hard to believe, but in fact THE RETURN OF DRACULA was produced and released one month before the film that stole all of its thunder, Terence Fisher's Hammer production DRACULA (US: HORROR OF DRACULA, also 1958), released by Universal-International. It's hard to believe because it contains scenes that mirror others in the as-yet-unreleased film, and because the film is so cleverly derived from two other pictures, Alfred Hitchcock's SHADOW OF A DOUBT (1953) and Robert Siodmak's Universal sequel SON OF DRACULA (1943).

In the story, a Transylvanian artist named Bellac Gordal (Norbert Schiller), is killed aboard a train en route to a transatlantic connection that was to take him to live in Carleton, California with his American cousin, Cora Mayberry (Greta Granstedt) and her two children. The killer (Francis Lederer), a vampire whom we take to be Dracula, impersonates Bellac as a means of eluding the authorities to America. The widowed Cora hasn't seen Bellac since they were both youngsters and this, taken together with her eagerness to have a man under her roof once again, results in the vampire being readily welcomed into her family and home. Cora's teenage daughter Rachel (Norma Eberhardt) has long fantasized about meeting this accomplished relative from Europe and is dazzled by him, being of artistic inclinations herself. (She wants to become a Parisian dress designer.) Rachel donates her free time to working for a local nursing home and spends a lot of time with a blind girl, Jennie (Virginia Vincent), whom Dracula tags as his second victim - apparently after victimizing off-screen the Mayberry family's pet cat Nugget. Somehow "Bellac" is never called upon to demonstrate his artistic prowess or to explain his daytime absences, which he spends in a dry-iced coffin in an abandoned mine. As Romanian officials dedicated to tracking the vampire narrow their pursuit to the Mayberry home, Bellac is just beginning to turn his predatory attentions to Rachel - vindicating the fears of her territorial boyfriend Tim Hansen (Ray Stricklyn).

THE RETURN OF DRACULA was produced and released at a time when Universal lost a measure of its control over the character, a situation which had prevented Bela Lugosi from making too specific use of his own screen persona unless he was clearly identified as other characters, as in THE MARK OF THE VAMPIRE (1935) and THE RETURN OF THE VAMPIRE (1944). The Bram Stoker novel had entered the public domain in America in 1956, but it would not do so in the UK and Berne Convention countries until 1962 - which explains why the Landres film had to undergo an absurd change of title (to THE FANTASTIC DISAPPEARING MAN) when it was released in Great Britain and Canada. Universal continued to control film rights to the character of Dracula for years because their 1931 film adaptation was based not only on the novel but on the Hamilton Deane stage play, which had its own copyright. (They would renew those rights with their undertaking of the John Badham/Frank Langella film of 1979.) With the name of Dracula legally accessible but the character as he was popularly known unavailable, Landres' film was carefully crafted to hint at certain possibilities involving the character while sidestepping any actual intrusion into Universal's domain.

Despite its brazen title, Fielder's script actually tap-dances around the issue of its vampire's identity. An opening narration (surprisingly like that which would open Hammer's BRIDES OF DRACULA, a Universal release of 1960 that didn't actually feature Dracula himself) mentions that Dracula fed on human blood "thus spreading his evil dominion ever wider" and "the attempts to find and destroy this evil were never proven completely successful, and so the search continues to this very day." In the opening scene, when a group of Transylvanian agents led by John Merriman (John Wengraf) track our villain (Francis Lederer) to his presumed lair, the coffin they open is not labelled Dracula, but "Graf [Count] Nagy Istvan," whose birth and death dates go back to the 1800s. Merriman later identifies his quarry only as "one of the Undead - possibly Count Dracula himself." Even in the trailer, which includes unique footage of Lederer addressing the viewer, he refers to himself only as "the vampire." Coincidentally, THE VAMPIRE was the title of another film, a modern day science fiction/horror fusion piece that Landres and Fielder made back-to-back with this one, prompting one to wonder if it might have been the original title under which this initial feature was originally registered. But the film takes its most interesting step in separating its Dracula from any other by having Merriman assert that, though many speak of a Dracula legend, its Dracula exists in reality. This would seem to me an important step for the horror genre as a whole, to insist that its monsters are actually real - not something to entertain us, not escapism.

In retrospect, there are a few other things that no one can take away from THE RETURN OF DRACULA. First of all, Francis Lederer's performance as Dracula remains completely original in its approach to the character, if that is indeed who he is. Secondly, it is arguably the first film to present vampires in a truly modern context - even if that context happens to be set in a small town "where nothing ever happens." AIP's Count Yorga films have long had this false reputation, when in fact even Tod Browning's original DRACULA (1931) was a contemporary film in its time. However, all of Universal's horror films featuring Dracula - with the exception of ABBOTT AND COSTELLO MEET FRANKENSTEIN (1948), which is arguably excusable from the discussion as a comedy - are set in a vague, costumed dress version of the present that seems just as remote to a modern sensibility as the Count's original time period. THE RETURN OF DRACULA is the first Dracula film that not only presents the undead in a world of fast cars, teenage fashions and Halloween parties. But all of these distinctions fade a bit in relation to the fact that THE RETURN OF DRACULA presents the first full color staking of a vampire in film history. In a surprising scene that, in a backwards way, has Hammer (not to mention HOUSE OF DARK SHADOWS) written all over it, a group of crucifix-bearing police and churchmen follow a fugitive vampire girl back to her tomb, pray for her immortal soul, and then hammer a stake into her chest - whereupon the black-and-white film briefly bursts (like the gunshot at the climax of Hitchcock's SPELLBOUND) into blood-burbling color. 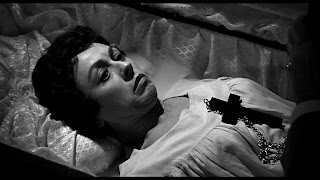 THE RETURN OF DRACULA is framed in its original 1.85:1 ratio, and is in DTS-HD mono with removable English subtitles. The images are so crisp that I found myself feeling hit over the head by a couple of continuity errors I've never noticed in a lifetime of viewing. (Keep your eyes peeled on the newspaper that Lederer is reading aboard the train.) The disc is region-free. The only extra is a 2:13 theatrical trailer with Paul Frees narration and spoilers aplenty.

The film, which streets this Tuesday, October 18, is available from Olive Films on Blu-ray and DVD.

My thanks to Tom Weaver for clearing up some issues concerning the novel's public domain status and Universal's rights to the character.