Sh! The Oedipus: The Return of BURIAL GROUND 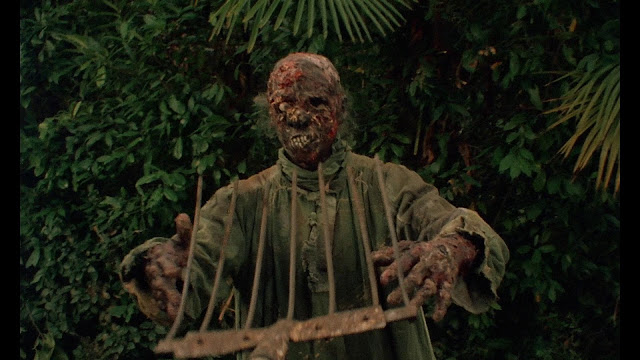 Andrea Bianchi's BURIAL GROUND (onscreen title: THE NIGHTS OF TERROR; Le notti del terrore, 1981) has gone down in horror cult history as one of those movies you must see to disbelieve. Moreso than any other horror movie that comes readily to mind, it is less a film than the oneiric suggestion of one. Its substance is so flimsy, so clichéd; a half-dozen of its unknown cast are billed with dodgy pseudonyms that are very nearly their own names; its score is a hodge-podge of library tracks and berserk synth noodlings without reason; the dialogue is often as generic as "What is it?" "A monster!"; and its scenes alternate with such mechanical extremity (sexy/scary/sexy/scary) that it makes more sense as the kind of meta movie you'd see playing somewhere in the background of a real movie. I'm convinced that it's become one of those films people share in an effort to make it more real. As a shared experience, it becomes a rather satisfying, if extreme, bad taste comedy. 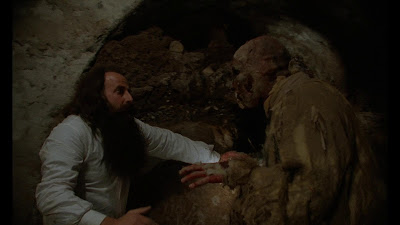 In a pre-credits sequence, Professor Ayers (Raimondo Barbieri acting as Renato Barbieri, if that makes any difference) - having already invited three couples to his villa to share in his discovery - identifies the means of reviving some ancient Etruscan monks buried on his premises. By the time the others get there, the host has been killed and the others kill time awaiting his arrival by making love until the moosh-faced zombies show up and start digging for digestible innards. This bizarre run-and-hide scenario (in which, after an hour of locking the zombies out, one character has the bright idea of letting them in, because they might be after something that's in the house) is finally driven over the top, way over the top, by the surprise 11th hour introduction of a hilariously wrong Oedipal amour fou sidebar about an adolescent boy's (Pietro Barzocchini/Peter Bark) desire to return to his doting, sexually active mother's (Mariangela Giordano/Maria Angela Giordan) accommodating breasts - an idea that repulses her when he's alive but suddenly becomes her greatest calling in life once he's dead. As all Hell breaks loose, the film concludes with a freeze-frame and a quote (complete with a misspelled word) from something called "The Profecy (that's another sic) of the Black Spider," which I defy anyone to find in book form. 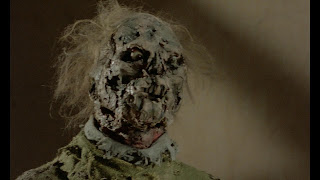 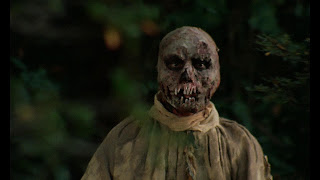 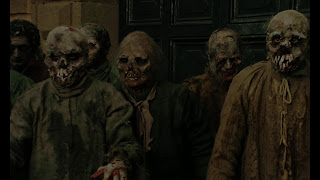 An obvious attempt to leech from Lucio Fulci's success with ZOMBIE (Zombi 2, 1979), BURIAL GROUND was scripted by Piero Regnoli, who was in fact the first screenwriter of Italy's Golden Age of Fantasy to write horror pictures, beginning with Riccardo Freda and Mario Bava's I vampiri (1957) and including a co-author's credit with Ernesto Gastaldi on THE PLAYGIRLS AND THE VAMPIRE (L'ultima preda del vampiro, 1960), which he also directed. Regnoli also scripted THE THIRD EYE (Il terzo occhio, 1966), PATRICK STILL LIVES (Patrick viva ancora, 1980) and NIGHTMARE CITY  (Incubo sulla città contaminata, 1980). Regnoli's THE THIRD EYE, subsequently remade as BEYOND THE DARKNESS aka BURIED ALIVE (Buio omega, 1980), and PATRICK LIVES AGAIN were both filmed at the same villa as this film, the Villa Parisi - which lent its ornate Art Nouveau architecture to numerous Italian films of all genres during the heyday of Italian film production, including Mario Caiano's NIGHTMARE CASTLE (Amanti d'oltretomba, 1966), Mario Bava's BAY OF BLOOD (Reazione a catena, 1971) and Paul Morrissey's BLOOD FOR DRACULA (1974). To anyone familiar with the ornate interiors of the Villa Parisi, BURIAL GROUND unreels as a kind of cheerful (or completely oblivious) defilement of the past - in a number of shots, the highest and lowest achievements of Italian art share the screen in a merry, demented clash. 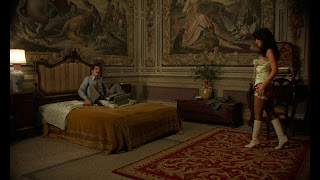 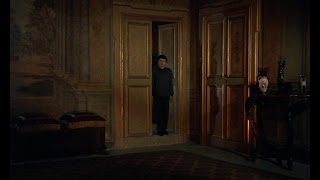 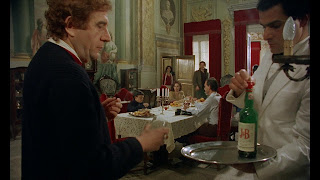 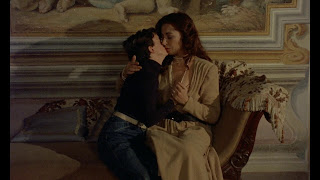 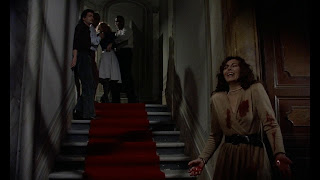 This collision of aesthetics also lends the film the feel of a nightmare where anything can defy logic to happen. For example, in the film's most successful horror sequence, the villa's maid happens to look out a second floor window only to have one of her hands suddenly nailed to a shutter by a knife-throwing zombie, while the others standing below somehow raise the rusty blade of a scythe above her neck and use it to guillotine her. 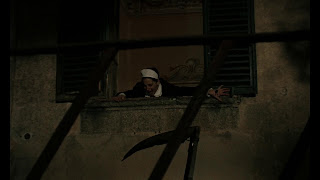 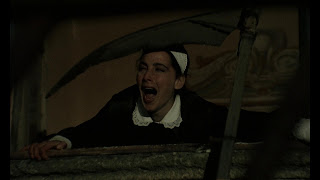 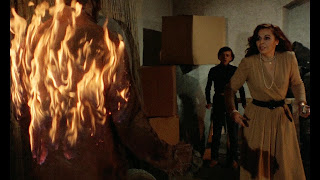 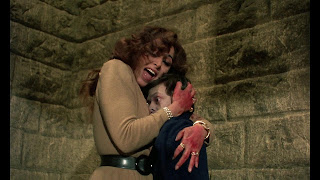 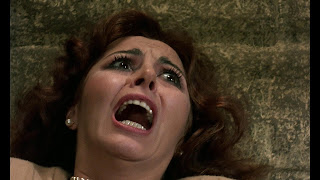 BURIAL GROUND first surfaced in America on Beta and VHS from Vestron, which I'm told somehow managed to assign a censored version to Beta (possibly the version shortened by 25 minutes for the UK release). As with the Shriek Show DVD that followed, they were all murky as hell, which was also a facet of the film's perverse appeal - and one now definitely cleaned up by Severin's stellar 2K restoration of "an immaculate film element recently discovered beneath the floorboards of a Trastavere church rectory." I've heard that the film was originally shot in 16mm but the image quality of this region-free disc is quite sharp with appreciably warm skin tones. Viewers familiar with the earlier releases will think the Villa Parisi finally paid its electric bill.

The extras include a 10m featurette on the Villa Parisi featuring Italian film historian Fabio Melelli; a 7m excerpt from a film festival Q&A with Peter Bark; an 8m interview with lead actor Simone Mattioli, who insists he's mainly a theater actor who appeared in films only for the money; some silent deleted and extended scenes and shots (including a nude clip of Karin Well, who doesn't appear nude in the feature); a joint interview with producer Gabriele Crisanti and star Mariangela Giordano that previously appeared on Shriek Show's DVD, and a theatrical trailer. We don't really learn very much about the four-week production from the extras, except that no actor can ever be too sure about how or why posterity may remember them. The disc packaging has reversable cover art and comes in a slipcase with original art by Wes Benscoter.

Severin Film's BURIAL GROUND streets on Tuesday, October 25, and you can snag your copy here.