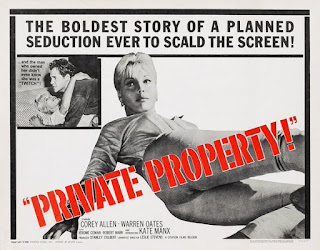 Among American filmmakers of the 1960s, Leslie Stevens is a name - not unlike Curtis Harrington - that beckons the eyes and ears of a particular niche of cine-cultist. Most of us enshrine his memory as the executive producer and spirit guide behind the acclaimed 1964-65 series THE OUTER LIMITS, which brought the look and feel of nouvelle vague cinema to prime-time science-fiction television for two memorable seasons. Stevens' fertile career as a writer, producer and director seems to stream out in both directions from THE OUTER LIMITS, but only because for many years it was his most accessible product. In fact, it was followed by some very interesting projects, most notably INCUBUS (1966), an art-house horror film starring William Shatner that, to my knowledge, remains the only feature filmed in the proposed universal language of Esperanto.

His later television productions in color - including IT TAKES A THIEF, SEARCH, THE INVISIBLE MAN (starring OUTER LIMITS alumnus David McCallum), GEMINI MAN and BUCK ROGERS IN THE 25th CENTURY - gradually dissolve what we know as the feel of Stevens' work, but what most of us associate with his look is the cinematography of camera legend Conrad Hall, who contributed to virtually all of Stevens' projects through INCUBUS. In addition to the TV-movie FANFARE FOR A DEATH SCENE (1964), their collaborations extend back to the short-lived but essential "intellectual western" series STONEY BURKE (starring Jack Lord and Warren Oates as a pair of itinerant rodeo workers) and a little-known debut feature, PRIVATE PROPERTY (1960), which until recently had not had a public screening in roughly 50 years. Shout! Factory released the complete series of STONEY BURKE as a six-disc DVD set back in 2013, and PRIVATE PROPERTY - the subject of a recent 4K restoration - is now available as a two-disc Blu-ray/DVD package from Cinelicious Pics.

PRIVATE PROPERTY, which was shot in and outside the picturesque Los Angeles home of Stevens and his then-wife, actress Kate Manx (who co-stars), tells what is no longer a particularly unusual story of Ann (Manx), a thirty-ish, bourgeois California wife, neglected by her husband, who responds to the attentions of a handy man who appears at her door. Duke (Corey Allen) is, in fact, one of two drifters - the other is the more dim-witted Boots (Warren Oates) - who may or may not be escaped prisoners, roving criminals, or runaway mental patients. They have broken into the presently vacated adjacent property, owned by "the Halls" (a reference to the film's fledgling camera operator), where Ann's sunbathing and laps around the pool have been providing them with afternoon entertainment.

A ten-day production, the film was Oates' second feature but the first to receive a theatrical release, which was meager because it failed to secure the approval of the MPPDA Production Code. The set's liner notes by Don Malcolm tell us that it grossed more than $2,000,000 in European bookings. Allen gives the film's most compelling performance, but his Duke is such an unpleasant character that the film feels permeated with the promise of a very unhealthy third act. The trouble is, it only partly materializes; even though some people die as a result of Duke and Boots' consensual home invasion, the drama is staged so obliquely and with such artistic distance as to deny the viewer any sense of purging the darkness evoked by the story. A few people have told me they preferred to turn the film off rather than see where its dark teasings were bound to lead.

Even though the film was clearly made as a vanity vehicle for Manx (who, though attractive, neither compels the camera or acquits herself as lead actress material), PRIVATE PROPERTY nevertheless offers an important sidebar to the careers of (forgive me) Hall and Oates - and thus the story of the rise of American independent cinema of the 1960s. The latter gives what is arguably his first fully-developed performance and his presence provides a through-line from STONY BURKE to the features that Monte Hellman arguably made in that series' image: THE SHOOTING, TWO LANE BLACKTOP and COCKFIGHTER. In the career of Conrad Hall, PRIVATE PROPERTY points the way forward to his 1968 Oscar-winning triumph, IN COLD BLOOD - another highly picturesque film about two deranged men driven toward a poorly-planned and unrewarding criminal culmination by an unresolvable homosexual chemistry.

While I applaud the film's restoration and availability, I was frankly hoping for more from it than it delivers. My initial response was that it felt like Curtis Harrington directing a script that Sam Fuller had left in a drawer. It's like that: a coltish art school noir with flip dialogue and a brazen spirit, with one foot firmly planted in a 1950s Sirkian idea of gracious living, while the other stirs with its toe an ambivalent hope that it might summon up something transgressive, progressive, or moderately dirty before it's through with us. The picture of which it most reminds me is Russ Meyer's THE SEVEN MINUTES (1970): tightly edited, nicely shot, prurient as hell but more tease than treat - a curiosity for sure, but ultimately a misfire. That said, and as with THE SEVEN MINUTES, any real connoisseur of the period or the people involved need to see it.

The imbalance of the main feature might have been adjusted by more generous bonus supplements, but Cinelicious Pics' set is accompanied only by an on-camera interview with still photographer and technical consultant Alexander Singer. The US theatrical trailer promised by the packaging was created for this release and should not be mistaken as archival promotion. There is nothing here to tell us if the film's original release even generated a trailer.

PRIVATE PROPERTY can be obtained here.