Some Outstanding Film Books of 2016

2016 is just about over (did I hear a "Thank Ghod!" out there?), so the time is right to compile a list of some of the best new film books on the market, so that you can follow my pretty blue links and lavish some of your hard-earned holiday gift money on them. Support your favorite writers, critics and historians! They are all that stand between you and a blank slate. 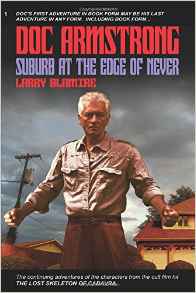 DOC ARMSTRONG: SUBURB AT THE EDGE OF NEVER by Larry Blamire (Bookaroonie Press)
Though a film book only by association, Larry Blamire's mind-boggling first novel is a direct sequel to his beloved cult comedies THE LOST SKELETON OF CADAVRA, THE LOST SKELETON RETURNS AGAIN, and the as-yet-unproduced script THE LOST SKELETON WALKS AMONG US. Set in 1963, it pits Dr. Paul Armstrong ("the pre-eminent scientist who came before all the eminent ones"), his chipper snack-serving wife Betty, Kro-Bar and Lattis (their alien next-door neighbors from the planet Marva), City Brad and Paul's ancient mentor Dr. Atroppasmirki, against an evil genius with a very large (but actually normal-sized) head, his army of toupeed zombies, and gobbling creatures from another dimension - all of them heck-bent on claiming the peaceful suburbia of Blendview for their own nefarious purposes. Accurately described on its back cover as an "absurdist mash-up of pulp adventure, B-movies, and surrealism," it's like nothing else I've read: it's like the slap-happy love child of Lester Dent (DOC SAVAGE), Raymond Queneau (ZAZIE DANS LE METRO) and Nigel Kneale (QUATERMASS AND THE PIT), packed with action and the kind of skillful silliness that, after prolonged exposure, begins to tweak away at the way you think. There are also some special winks included for the cine-literate, like a passage where the novel turns to black-and-white for a stock footage battle of the cheap dinosaurs as Doc looks on through the fissure of a cave shelter. A book of this level of imagination and literary quality actually gives me hope for the future of self-publishing. 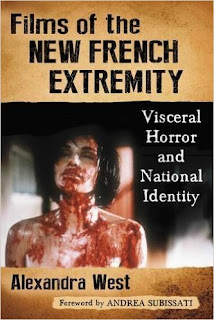 FILMS OF THE NEW FRENCH EXTREMITY: VISCERAL HORROR AND NATIONAL IDENTITY by Alexandra West (McFarland) One of the most exciting things for me, as a reader of books pertaining to horror cinema, is when a fresh name appears on the scene with a new handle on things. This book by Canadian author-critic Alexandra West does precisely that, gathering an assortment of similarly violent yet otherwise seemingly unconnected films - HIGH TENSION, MARTYRS and IRREVERSIBLE, to name a few - and presenting them as a plausible subgenre of socio-political substance. West's persuasive text makes you want to go back and revisit this body of work from her perspective. 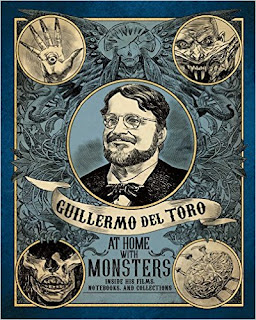 GUILLERMO DEL TORO: AT HOME WITH MONSTERS, INSIDE HIS FILMS, NOTEBOOKS AND COLLECTIONS by Britt Salvesen, Jim Shedden and others (Insight Editions)
A splendid word-and-image companion to the dazzling Guillermo del Toro Collection exhibit launched earlier this year at the Los Angeles County Museum of Art, and now on tour. At less than 160 pages, one wishes the book was a bit more lavishly illustrated but it contains some choice material, including an interview with del Toro that explores in detail his creative imagination, his sources of inspiration, and his curator's eye as a collector of macabre and fantastic memorabilia for his pied-a-terreur, Bleak House. 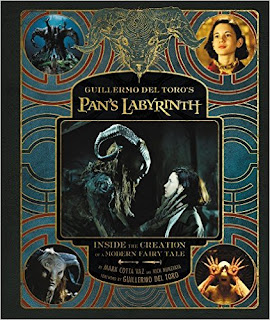 GUILLERMO DEL TORO'S PAN'S LABYRINTH: INSIDE THE CREATION OF A MODERN FAIRY TALE by Mark Cotta Vaz and Nick Nunziata (Harper Design)
On the occasion of its 10th anniversary, Guillermo del Toro has lent his sponsorship and authority (and foreword) to this marvelous, full-access production history of his finest film to date. With its rich assortment of illustrations, including reproductions of del Toro's fascinating production designs and a wealth of production photography, this is very much a hardcover version of the CINEFANTASTIQUE double issue that might have been, were CFQ still publishing. One might wish that a book like this had been released when the film was still new, but it coincides well with Criterion's TRILOGIA DI GUILLERMO DEL TORO Blu-ray box set (including CRONOS, THE DEVIL'S BACKBONE and PAN'S LABYRINTH), stakes a valid claim on the film's enduring classic status, and proves del Toro as vital a curator of his own creations as well as those creators whose works have inspired him. 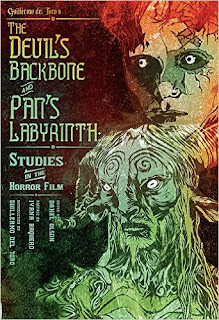 GUILLERMO DEL TORO'S THE DEVIL'S BACKBONE and PAN'S LABYRINTH: STUDIES IN THE HORROR FILM, Edited by Danel Olson (Centipede Press)
For those readers who still crave a more in-depth appreciation of del Toro's work, Jerad Walters' "Studies in the Horror Film" series has served up just the book for you with this compendium of 10 critical essays and 21 cast-and-crew interviews. It's twice the length of the aforementioned, authorized book on PAN'S LABYRINTH and also more academic, but indispensible reference for anyone delving into the deep end of del Toro's political fantasy fables. 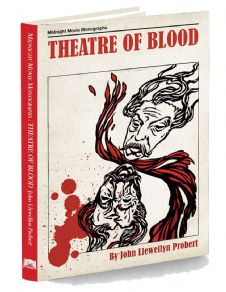 MARTIN by Jez Winship / THEATRE OF BLOOD by John Llewellyn Probert (PS Publishing)
These first two releases in Neil Snowdon's "Midnight Movie Monographs" series - issued in limited hardcover jacketed editions of only 500 copies - throw down a pretty impressive gauntlet. Monograph series propose a challenge as significant to most writers and critics as the form's temptation is irresistible: it's generally not part of one's education to sustain discussion of a single film for a hundred pages or more. The authors of these two attractively-designed books meet the challenge head-on and in highly individual form, giving us as sense of the spread likely to be encompassed by later entries in the series. In writing about the Vincent Price dark revenge comedy, John Probert takes a more personal, subjective approach that allows for a measure of nostalgia and personal reminiscence in his overview, whereas Jez Winship takes a more impersonal, objective route to an appreciation of George A. Romero's highly original vampire story and why it was so groundbreaking for vampire cinema in particular and the horror genre in general. Despite their differences in approach, passion is evident in both books, which I found more substantial than books I've read in other monograph series. A promising start. 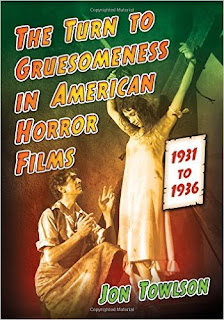 THE TURN TO GRUESOMENESS IN AMERICAN HORROR FILMS, 1931-1936 by Jon Towlson (McFarland)
This may well be the book on "classic horror" to beat this year. Jon Towlson's thesis is that, despite the common perception that Hollywood's Golden Age horror classics offer a milder, safer brand of terror than contemporary slasher fare, the pre-code years were, if anything, just as grisly and deranged - at least in their raw conception. Naturally, this book details the nastier minutia of such films as MURDERS IN THE RUE MORGUE (1932, pictured on its cover), THE MASK OF FU MANCHU, MURDERS IN THE ZOO, THE BLACK CAT, MAD LOVE and THE RAVEN (1935, whose cold British reception in particular led to the curtailing of this unwholesome trend), but it also delves into how some original screenplays had to be toned-down to pass the censors, and why some particularly decadent scripts (such as James Whale's proposed DRACULA'S DAUGHTER) never reached a soundstage. Not all of the information is new, of course, but it's good to have it all in one place, fortified by additional readings of unproduced scripts, especially as bolstered here by Towlson's fine writing. 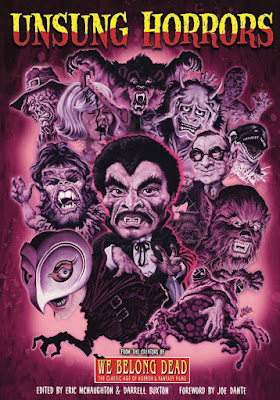 UNSUNG HORRORS Edited by Eric McNaughton and Darrell Buxton (Buzzy Krotik Productions, www.webelongdead.co.uk)
I believe that what separates the real horror fan from the weekend hipsters is a passion that extends to the genre's most deeply buried treasure. Anyone can talk up a love for ALIEN, but when you find someone who swoons at the mention of LIPS OF BLOOD or THE HOUSE WITH THE LAUGHING WINDOWS, you know you've found a friend for life. This lavish new oversized softcover from the publishers of the British magazine WE BELONG DEAD (who brought you last year's '70s MONSTER MEMORIES) embodies this idea - and like their previous, it's all-color, packed with love letters to obscure monster minutiae, and it's surprisingly hefty. There is no Table of Contents or Index; the idea is to dip in wherever you like and continue till you're worn out or just can't wait to watch one of these championed underdogs. It starts with SEVEN DEATHS IN THE CAT'S EYE and goes from there. Foreword by Joe Dante, no less, and the delightful cover art by Paul Garner makes the package literally irresistible.

Also Worth Mentioning (But I Haven't Personally Seen a Copy Yet): DARIO ARGENTO: THE MAN, THE MYTH & THE MAGIC by Alan Jones (FAB Press); EURO GOTHIC: CLASSICS OF CONTINENTAL HORROR CINEMA by Jonathan Rigby (Signum), INTERVIEWS TOO SHOCKING TO PRINT: CONVERSATIONS WITH HORROR FILMMAKERS AND THEIR ACCOMPLICES by Justin Humphreys (Bear Manor), ITALIAN HORROR CINEMA Edited by Stefano Baschiera and Russ Hunter (Edinburgh University Press), RICHARD MATHESON'S MONSTERS: GENDER IN THE STORIES, SCRIPTS, NOVELS AND TWILIGHT ZONE EPISODES by June M. Pulliam and Anthony J. Fonseca (Rowman & Littlefield), the biography SOMETHING IN THE BLOOD: THE UNTOLD STORY OF BRAM STOKER, THE MAN WHO WROTE DRACULA by David J. Skal (Liveright), and SUSPIRIA by Alexandra Heller-Nicholas (Devil's Advocate) and A THOUSAND CUTS: THE BIZARRE UNDERGROUND WORLD OF COLLECTORS AND DEALERS WHO SAVED THE MOVIES by Dennis Bartok and Jeff Joseph (University Press of Mississippi).