ONE NAKED NIGHT, or They're Tearing Down Al Viola's Bar 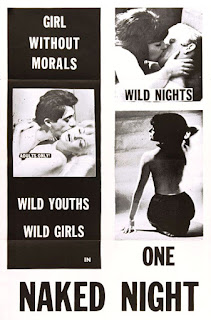 The other night, not being quite ready to go to bed and undecided about what to watch, I drew Albert T. Viola's ONE NAKED NIGHT (1965) at random to see what it was about. As the title sort of foretells, it's a mid-Sixties nudie, but what does that really tell you? You never quite know what you might be getting into with those, which is part of their appeal - it could turn out to be a wayward avant-garde film like Michael Findlay's TAKE ME NAKED, a psychological drama like Joe Sarno's RED ROSES OF PASSION, an appalling roughie like Curt Ledger's SHE CAME ON THE BUS, or an out-and-out piece of trash. Eighty minutes later, I was glad I watched it because ONE NAKED NIGHT - above and beyond what it set out to be - belongs to a special category of film whose character only becomes pronounced with time. It tells a fictional story but its real value is that story's documentary context. Like old episodes of NAKED CITY, it inadvertently preserves a New York City of sparkle and swagger and, above all, character that no longer exists.

We should set-up a sub-genre for films with this unique form of appeal. It's not a conscious thing with ONE NAKED NIGHT, obviously, but this preservation of a time and place destined to disappear was something that Jean Rollin deliberately set out to capture with his movies. He was drawn to buildings, castles, even towns that were edging into decay and demolition. He delighted in photographing places that, despite being built to endure centuries, somehow had death somehow built into them nevertheless. As an American alternative, I could cite Willard Huyck's MESSIAH OF EVIL (1975), with its haunting scenes set in Edward Hopper-like streetscapes riddled with the names of antiquated, possibly extinct businesses like W.T. Grant and Florsheim Shoes. What ONE NAKED NIGHT inadvertently captures is what used to be New York City's Fifth Avenue, before there was a Prada or Barnes and Noble in sight.

ONE NAKED NIGHT is the story of a young woman, Candy Stevens (Barbara Morris), who leaves her small and small-minded hometown after the suicide of her mother, a woman who was driven to prostitution to ensure that her daughter attend only the best schools. Wanting to put all that behind her, Candy goes to New York City (like David Bowie moving to Berlin to kick his drug habit), where she has been invited to share an apartment with her old friend Laura (Sally Lane). Laura has been making a good living as a fashion model and knows a lot of "exciting people," which turns out to mean that she poses naked for photographers and has a lot of "dates." She brings Candy along to meet her photographer friend Bill (Allen Merson), who agrees to spare a few minutes to take some sample modelling shots of Candy - clothed, of course! In time, they start going out together and hitting all the great night spots, and she gradually relaxes in terms of what she's willing to do in front of the camera and behind closed doors. Bill inevitably breaks her heart, which opens the door for a predatory lesbian neighbor, Barbara (OLGA series star Audrey Campbell), to position herself as her new best friend. She tells Candy stories of how all men are rotten, relating the story of how she lost her own virginity, and beckons her to follow her to a window where she watches Laura engaging in a three-way with two beaux. Barbara never quite gets her wish, as Candy ends up hooking-up with a sculptor named Joe (Joseph Suthrin), which looks like a good thing until her clinging nature gets in the way of his attention to his work. Finally kicked out of his studio apartment, Candy returns to Laura's place and ends up "entertaining" with her until SPOILER she ends up - as one might expect - going the way of her own mother.


The simple storyline is meager and dates back to silent movie morality plays, but when Bill introduces Candy to NYC night life, ONE NAKED NIGHT suddenly explodes with vitality and fascination. After a montage of Fifth Avenue storefronts and façades, there is an extended sequence of people dancing in a Harlem jazz club that is truly remarkable. It's not just the places or even the faces, though both have surprising depths of character; the sequence presents us with a way of life that doesn't seem to exist anymore - not because the places are gone, but because people now interact very differently, even in crowded clubs. In this footage, everyone seems to be outwardly sharing and expressing more of themselves. Even moreso than in the film's would-be erotic scenes, here Viola captures a feeling of real human intercourse, real joyous abandon. And then Viola's camera (which he self-operated) returns back outside to linger on the flashing signs, the faces of different businesses receding into the distance on city blocks, the beckoning neon heralding refreshment and adventure - it almost seems to know that none of it but the sidewalks would survive. Editor Fred von Bernewitz infuses it with adroit rhythms, juggling this dreaminess with a sense of a real bustling city, overpowering in its sheer size and character, turned languid and furtive after dark, and the movie finds its real importance here, in these unintended evocations of long walks home after nights in packed clubs. He seems to invite the viewer to wander through it all, like Little Nemo in an unimaginably vast metropolitan dreamscape. This is what Petula Clark was singing about.


The acting, I must say, is not bad for this sort of thing. Audrey Campbell actually gets a chance to act here and she's so good one wishes she had worked more often with Joe Sarno, who could have given her characters and situations worthy of her. She even has a brief nude scene, something she never did in the OLGA films. Surprisingly, there was even an official soundtrack release of the jazz soundtrack by Chet McIntyre, which suggests to me that this film was undertaken with somewhat more than the usual ambition - and it is an appealing score.

Whatever its intentions, ONE NAKED NIGHT is a bit more than the immoral morality tale it set out to be. It's a little time capsule of a thrilling place we never had the pleasure of being free and 21 in.

ONE NAKED NIGHT is available on DVD-R or as a download from Something Weird Video.