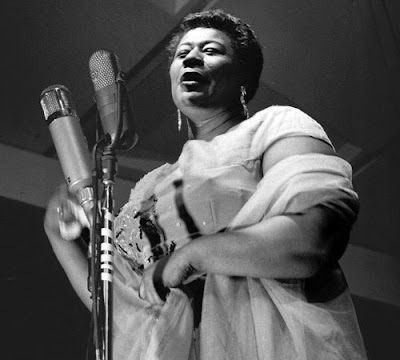 They called her "The First Lady of Song." Ella Fitzgerald, born 100 years ago today. Since her death in 1996, she has ascended to a level she was said to occupy in life, that of a genuine musical legend; she is now interred in box sets with celestial collaborators.

It's hard for me to believe now, but I was once in her presence - backstage at Cincinnati's Music Hall in September 1977 - and even touched her shoulder, which was covered in heavy mink, in hello and farewell. I don't think she felt it, and she might have looked askance at me or clobbered me if she had. But it's what I came away with from our brief encounter, rather than an autograph or a conversation. I stood beside her as she talked with another fan. She had a charmed music even in her speaking voice, but she also had the staunch aura of a warrior, of someone who had endured a lot of ugliness to bring a little beauty into the world.

Classic TV aficianados will be excited to learn that Laurel Records has just released MUSIC FROM THE ORIGINAL TELEVISION SERIES "THE RIFLEMAN," a generous two-disc set of Herschell Burke Gilbert's original music cues. This is some of the most readily identifiable, and long coveted, ever withheld for so long from the public reach, and it has finally been brought to disc in stunning fashion by the composer's son John G. Gilbert. The first disc of the set includes 35 different original cues by Gilbert, totalling 57:48 in length, and there is also a bonus disc of 26 additional library tracks heard on the show that Gilbert accessed from the MUTEL music library, totalling 61:44! Rounding out the package is an informative, 22-page illustrated booklet that offers a biography of Gilbert, a history of the series and its music (all of which - surprise! - was originally recorded in Munich, Germany!), and a list of feature films in which the MUTEL tracks can also be heard (for example, RIOT IN CELL BLOCK ELEVEN, WHILE THE CITY SLEEPS, THE THIEF and BEYOND A REASONABLE DOUBT). The original Gilbert tracks are a sonic revelation, yielding up charming, colorful instrumentation details often lost in playback on the show's 16mm syndication prints. 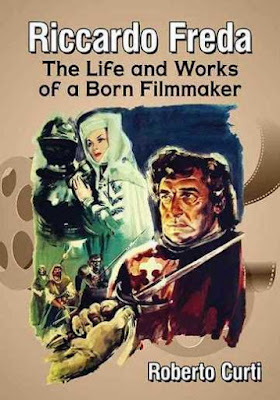 Just released by McFarland is Roberto Curti's RICCARDO FREDA: THE LIFE AND WORKS OF A BORN FILMMAKER, a most welcome 376 page critical biography of the Egyptian-born filmmaker, an Italian swashbuckler specialist who is sadly almost entirely known in this country for a handful of horror films he barely took seriously (I VAMPIRI, CALTIKI THE IMMORTAL MONSTER, THE HORRIBLE DR HICHCOCK, THE GHOST, TRAGIC CEREMONY). The joy of Curti's text is that he has sought out and screened as much of Freda's work as can presently be found, and made sense of Freda's overall career for the first time in English - vital in itself, as many of the films either do not exist in English or can no longer be found in the English-dubbed versions that once circulated (as in the case of the 1940s adventure THE GAY SWORDSMAN or the 1950s thriller TRAPPED IN TANGIERS). Indeed, it was brave of McFarland to undertake this book because it covers a number of features that American readers simply have no way of seeing. Curti has interviewed a number of former Freda associates, including his daughter Jacqueline, and manages to shed new light on facets of his life and career that all other references based in repeated misinformation; for example, he reveals that Freda and his muse Gianna Maria Canale were never actually married and that 1957's I VAMPIRI (their most famous collaboration) actually marked the end of their romantic relationship. The history of the Italian popular cinema is something of a slippery slope; indeed, there are also many cases in the book when the memories of different participants are found to be at odds with one another. Generally, Curti acknowledges them all and allows them to reader to choose the truth for themselves. I am a rare exception to this rule, often cited by Curti as a source of misinformation, even when said information was given to me by Freda himself or responsibly culled from published interviews. This would annoy me less if I didn't have such respect for Curti's own contributions; he proves himself a vigorous and passionate champion of Freda, adding insights and discoveries of consequence to the existing literature, in highly readable English. As for the feeling of the reader, it is one of privilege and great liberty, to actually read at length, and in depth, about Freda (indeed, this sphere of filmmaking) without reaching for the Italian/English Dictionary with each new sentence. If the history of the Italian popular cinema is a subject near and dear to your heart, as it is to mine, you must have this book. One hopes that its existence will help to spur a resurgence of interest in Freda's work and its resurrection on Blu-ray. Also available from McFarland directly at www.mcfarland.com (or by calling 800-253-2187). 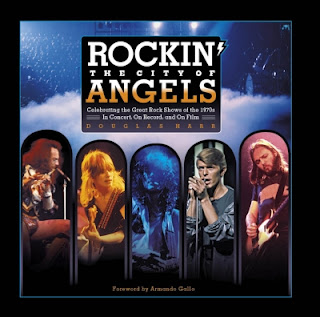 Donna and I were recently sent a lavish book by rock historian Douglas Harr, which he was kind enough to tell us had been inspired in its presentation by MARIO BAVA - ALL THE COLORS OF THE DARK. Although it's a bit outside my usual scope here, I would like to recommend this book - ROCKIN' THE CITY OF ANGELS: CELEBRATING THE GREAT ROCK SHOWS OF THE 1970s IN CONCERT, ON RECORD, AND ON FILM - both for the historical record it represents, and as a magnificent objet of the book-making art. Taking a different approach to the subject of 1970s rock than other books, Harr uses the lavish coffee table book model as a means of documenting - in near-cinematic terms - how in-concert performances during this period evolved from the raw extended performances by groups like Led Zeppelin, Emerson Lake and Palmer, and The Who into something more ambitious and theatrical with the arrivals of Alice Cooper, David Bowie, and KISS, culminating in such classic conceptual stagings as Genesis' THE LAMB LIES DOWN ON BROADWAY and Pink Floyd's THE WALL. Harr's essays describe in vivid detail the experience of being a Los Angeles audience member (hence "THE CITY OF ANGELS") at each of these shows, then explore how successfully these live events were subsequently preserved on record and on film. The text is richly complemented with more than 600 luscious images, predominantly color, showcasing the various acts in performance, taken by photographers Richard E. Aaron, Jorgen Angel, Martyn Dean, Ian Dickson, Armando Gallo, Stacey Katsis, Neal Preston, Jim Summaria, Lisa Tanner, Brian Weiner and Neil Zlozower. This book is clearly a labor of love and a marvelous tool for evoking memories of long-ago venues, and I would imagine equally valuable to fans of the various bands who were not around to see these tours when they originally took place. In its determination to be encompassing, the book doesn't allow itself any musical snobbery, which is the approach most fair to the subject at hand. King Crimson fans may resent the fact that Harr also finds room for the less cerebral Supertramp and AC/DC, but they may also learn a thing or two by reading those chapters outside their usual habit trails. I was astounded to discover that this book is priced under $100; I don't know how they managed it, but you get a lot of book for your money and you might even get high off the printer's ink. In addition to the highlighted link, you can also find ROCKIN' THE CITY OF ANGELS here.

As always, the bolded blue links will take you to sales pages for the item under review.

Fun at the New Beverly

I have a new 3500-word essay about Elvis Presley's 1960s films that is now posted over at the New Beverly Cinema website, which you can find right here. The primary focus is on two films - FUN IN ACAPULCO (1963) and CLAMBAKE (1967) - which will be playing there for one night only on Tuesday, April 18, in stunning IB Technicolor 35mm prints. I'm hoping to pack the house.

The Elvis films were as central to my early movie-going experience as monsters or anything else, yet this is the first really substantial thing I've ever written about them. I hope you'll enjoy it.