All About THE GENE KRUPA STORY 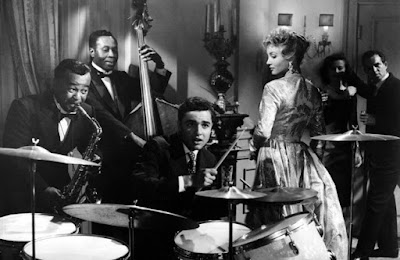 I have a new essay premiering today on the New Beverly Cinema blog, promoting this weekend's screenings of THE GENE KRUPA STORY (1959) as part of their month-long tribute to actor Sal Mineo. Be there or be square!
Posted by Tim Lucas at Tuesday, May 09, 2017

Israeli singer-actress Daliah Lavi passed away last Wednesday, May 3, at the much-too-young age of 74. She was a good friend to us at VIDEO WATCHDOG and we will miss her terribly.

Long years ago, I located this feline goddess of the silver screen - in, of all places, Asheville, North Carolina - and she agreed to be interviewed for my Mario Bava book about her important work on THE WHIP AND THE BODY (1963). I found her to be wonderfully warm, funny, and down-to-earth. Talking about her past put her into an expansive mood and we ended up also talking a bit about her early life and how she ended up becoming an actress, the farthest thing from her thoughts.

She had been an impoverished kid in a kibbutz when Hollywood came calling in the form of a Kirk Douglas picture called THE JUGGLER (1953). She and her little friends kept sneaking into the pool area to gawk at the stars - the cast included future HOGAN'S HEROES star John Banner who became a valued friend for years after. By the end of production, the actors became so fond of Daliah and her antics, they arranged a future for her.

On her birthday, they presented her family with an opportunity for her to study ballet and reside with a family in Sweden. She eventually became too tall for ballet but she lived with the right Swedish family to pursue acting; it was the family of Volodja Semitjov, the screenwriter of Arne Mattsson's ONE SUMMER OF HAPPINESS (1951), one of the most successful Swedish films ever made. Daliah never acted in a Swedish film (she insisted) but did appear in one; her first proper film was her first starring role, in a picture called BLAZING SAND (1960), which she took pride in noting was the first Israeli-German co-production. (It's available as a DVD-R or download from Something Weird Video, if you'd like to see it.)  She felt that her best film was Brunello Rondi's IL DEMONIO (1963); I had to break the news to her of her co-star Frank Wolff's suicide. She admitted to being distracted (in love with the man who became her first husband) during the making of the Bava film, but when she looked at the copy I sent her, she could understand its value. Her Nevenka - a character created by another friend, Ernesto Gastaldi - is one of the great performances in Bava's catalogue, powerfully intuitive and decorative. She considered most of her films to be "garbage" and didn't like to talk about the really bad ones that came after the Bava film - she frankly included CASINO ROYALE (1967) under that heading and told me that it put her to sleep every time she tried to watch it. She finally retired from films in 1971 (her last was CATLOW with Yul Brynner) and gave her creativity completely to music. She released several albums and many singles, including songs about unification such as "Jerusalem," which became huge hits in Germany. She retired from live performance around 1987, but this is who Daliah most essentially was: a woman who had been a dancer who became an actress who became a singer whose ultimate purpose was to be nurturing, healing, a unifying link of good will between people and countries.

After our interview, Donna and I set about completing the Bava book and presented Daliah with a copy (and an extra one for one of her sons), as well as a copy of IL DEMONIO I had located - she told me she was so excited to receive it and share it with her loved ones. If I remember correctly, it was around this time that she told me that she had been approached to perform a new series of concerts in Germany, which she would agree to do only if it was presented as a farewell tour. I saw reports, even some of her television appearances, during this 2008 tour, which became a tremendous success. Her last concert was recorded digitally and was released as a bonus DVD in a collection of re-recordings of her most popular songs; she got a Gold Record for it. "What a nice way to retire from the record business," she wrote to me. If you look at the YouTube videos, you'll get some idea of how much her music and curing presence was adored by the German public.

It was a couple of years after her homecoming - and about five years after the publication of the Bava book - that I emailed her to ask if we might continue our interview and make it a proper feature in VIDEO WATCHDOG. She hated to send emails so she asked me to call her - and she immediately agreed. We talked at wonderful length - frankly, I don't think she ever learned how to tell stories concisely! - and the interview became the centerpiece of VW 170.

In the course of preparing that issue, I was successful in finding on eBay a photograph taken on the set of THE JUGGLER that showed Kirk Douglas sitting among the film crew, with a very recognizable child standing directly behind him. It was indeed Daliah. We scanned the photo for use in the interview and sent her the original, which she had never seen before, and she told me that she had it framed to be displayed in her home. She told me that seeing it gave her a feeling, much like her farewell tour, of having come full circle. We sent her copies of VW 170 that she gave to the guests attending her 70th birthday party.

After this, we kept in touch intermittently - when I had a question, when someone was trying to reach her through me, when it was her birthday. I urged her to write her autobiography, but she told me that she had too many secrets to keep for other people; she believed that such books were usually written only to spread dirt and she wasn't going to do that. (In fact, if I ever asked her what she thought about a colleague, she rarely said more than "He was nice" or "She was nice" for that very reason.) As time passed, she told me that she had taken a bad fall while walking around her property and had to spend some time in bed; then she injured her shoulder and had to receive a titanium implant. She complained about the way it conducted cold; it was an unpleasant companion to her in the wintertime. But she would laugh as she said this, marveling that she was now part-bionic. She had come a long way from that kibbutz in Shavei Zion, and we both agreed that she had lived a very blessed life.

I became a fan of Daliah's music as a result of being her friend. She was a wonderful woman - incidentally, she was the first person I interviewed for my book who took an active interest in me and my devotion to Bava, who asked me questions. The essence of the woman I knew is in her music, not in her films, as she would have been the first to agree. She was such a warm and vibrant spirit, I can't believe she's gone. It hurts a little now to have her telephone number.