Fresh As Ever: MARRIED TO THE MOB 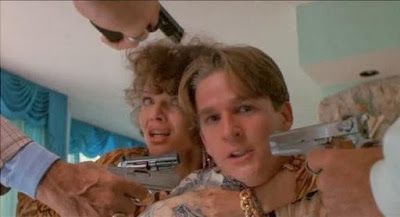 Not sure how or why I missed it all these years, but finally caught up with Jonathan Demme's MARRIED TO THE MOB (1988) last night and loved it. I tend to think of the 1980s as a period of uncomfortable transitions, for both the cinema and fashion in general, but everything about this film remains light, tight and refreshing. It has a comic/romantic verve to it that reminded me a lot of Preston Sturges, but it was less to do with the writing than the cast - all bright, all attractive, all inspired,and touched by an ethnic diversity that feels happy and genuine rather than forced as it so often does today. It also does something with its end titles I've never seen done elsewhere; it tells the film's story a second time, chronologically, using only outtakes - glimpses of a dozen or more scenes we didn't see, yet we instinctively know where they would have fit; it seems to fill in the lives of all the characters, lending further color and dimension to everyone and thus making the whole confection seem doubly real.

Seeing the film now is also a sobering reminder of how much can change in 30 short years. All the principals (including Alec Baldwin and Oliver Platt) look like kids; Michelle Pfeiffer and a remarkably athletic Matthew Modine (neither of them seen much anymore) were never better; Dean Stockwell (now 80-something) is 50-something and still looking flashy and virile; Mercedes Ruehl (who won the New York Film Critics Award for her performance as the insanely jealous wife, but would now rate a "Who?" from one or two generations further on) burns up the screen; and Demme (now dead) comes across as the most alive young director on the block.

A movie that is not only good to see, but which seems genuinely happy to see you in return. Warmly recommended - on Blu-ray from Kino Lorber.