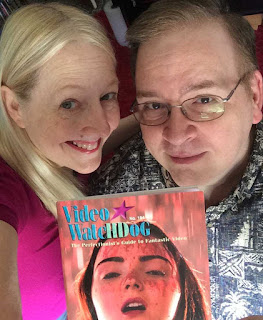 Are you ready for another anniversary?

It was twenty-seven (27) years ago today that Donna and I shipped out the first issue of VIDEO WATCHDOG to subscribers all over the globe. It's not every magazine that gets launched with a subscriber base already in place, but between my "Video Watchdog" column for GOREZONE and ads placed in FANGORIA, we were fortunate to be one of that elite number. 350 subscribers before our first issue was printed, Donna tells me.

As symmetry would have it, today we find ourselves mirroring that occasion by making public our Farewell Issue - VIDEO WATCHDOG #184! You may have seen it discussed by some lucky early recipients on message boards and social media, but now it's available to everyone - both in its printed form, and as a free digital edition. This final issue does not play by the usual rules; it was produced in strictly limited quantity, and it is not being sold on newsstands. You can only secure your copy from us directly at www.videowatchdog.com.

This issue was made possible when the rights to VIDEO WATCHDOG (concept and business) was returned to us last May, along with the balance of my intellectual property, by the trustee of our bankruptcy case. But it would not have happened without the particular kindness of our subscriber Richard Kaufman, the editor of GENII, the Conjuror's Magazine. Richard told us that, as a fellow print man, he was aware of how much of our soul and guts we had invested in each and every issue of VW, and that it rubbed him the wrong way to see it denied its proper closure - especially when he learned that we had been obliged to shut down with our next issue roughly 90% ready to go to press. He asked if we had any objection to him seeking the production costs we needed, on our behalf. We told him that our hands were tied, but when we were granted the legal freedom to move ahead, we gave him the green light. Within a single week, he found a couple of illustrious patrons (noted on our inside front cover) who helped prestidigitate it into being.

We're very proud of this issue. First and foremost, it contains the second half of John-Paul Checkett's engrossing and rewarding overview of Carmilla on the screen, this portion encompassing such titles as LET'S SCARE JESSICA TO DEATH, THE BLOOD-SPATTERED BRIDE, ALUCARDA, THE MOTH DIARIES and THE UNWANTED. We also have Ramsey Campbell's thoughts on David Robert Mitchell's IT FOLLOWS, Larry Blamire's appreciation of the classic TWILIGHT ZONE episode "And When the Sky Was Opened," Douglas E. Winter's Audio Watchdog column (covering THE REVENANT, EX MACHINA and more), as well as (by my count) 40 reviews in all - written by such illustrious contributors as Kim Newman, Budd Wilkins, John Charles, Bill Cooke, Shane M. Dallmann, Michael Barrett, Chris Herzog, Eric Somer, Lloyd Haynes and yours truly. I'm glad that I was able to get one last Jess Franco review in there.  In our final Letterbox department, we present five (5) pages of comments and reminiscences from readers about what VIDEO WATCHDOG has meant to them over the years.

The front cover depicts Lily Cole in Mary Harron's film of THE MOTH DIARIES (Mr. Checkett's account of Rachel Klein's 2002 novel and its 2012 film adaptation are an issue highlight), and in hindsight, I see it as something of a symbolic gesture on our part. For the first time ever, our cover image is no longer framed by a video screen proscenium; we've finally come out the other end of the baptism of blood this past year has been, and broken through our formatting to freedom - the freedom to get this last issue to you. And, as someone pointed out to us, our back cover image of Maika Monroe looking over her shoulder in IT FOLLOWS seems to embody a backward glance at the 27 years of achievement trailing behind us. Cool. 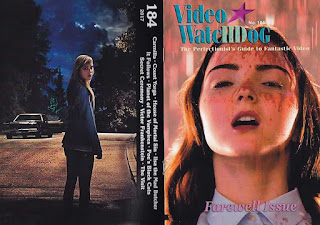 In closing, Donna has asked me to inform everyone that this Farewell Issue includes a very special sale offer on page 17. All the more reason to reserve your hard copy while they still last.