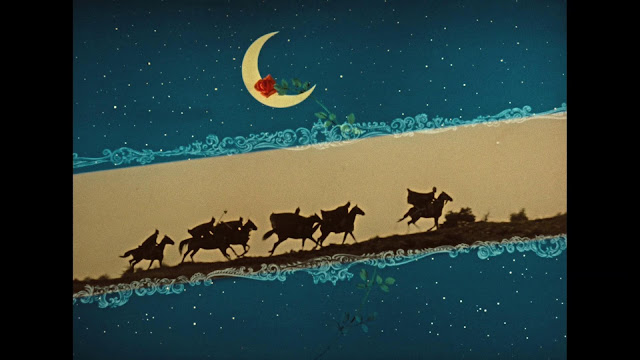 To watch a Karel Zeman film is to feel that all other filmmakers are impeded, that they were short-changed on the day the Angels distributed the tools of filmmaking. Pick a random Zeman film and you will see his mastery of black-and-white and color; live-action and animation; collage and sculpture; sobriety and humor; science and imagination. His creativity is like a fountain; it never stops flowing, never stops its own endless reinvention. A simple shot of a rose in the moonlight is enough to bring us to our knees.

Zeman, a Czech filmmaker who lived from 1910 to 1989 and made films from 1946 to 1980 (his first feature, CESTA DO PRAVEKU / JOURNEY TO THE BEGINNING OF TIME, in 1955), belongs in the ranks of animators who became directors: Georges Méliès, Ladislas Starewicz, George Pal, Frank Tashlin, and even Mario Bava - but he is particularly well-placed among Pal and Starewicz, and a third filmmaker who never graduated to stage direction: Lotte Reiniger (best-known for her animated cut-out feature THE ADVENTURES OF PRINCE ACHMED, 1926). As a child, Zeman fell in love with the stories of Jules Verne and the illustrations of Gustave Doré and became a confirmed fantasist. His aforementioned debut begins realistically, with live action, but then almost imperceptibly melds into fantasy as a group of boys on a nature trip find themselves face-to-face with creatures that never existed in their own time. His second feature, VYNÁLEZ ZKÁZY / A DEADLY INVENTION (1958; released in English territories as THE FABULOUS ADVENTURES OF JULES VERNE), was a far more radical and delightful creation, a melding of different Verne scenarios into an original story, told in a conglomeration of live-action, trick shots, and animation that brought Verne's original book illustrations uncannily to life. After more than half a century, it remains the most commercially successful Czech film of all time - and the primary reason why there now exists a Karel Zeman Museum in Prague. This same museum has made it their mission to see Zeman's groundbreaking work better known and more fully appreciated; some years ago, they began releasing DVDs of his work, with VYNÁLEZ ZKÁZY released as a solo (and English-friendly) Blu-ray disc, while Zeman's first three films have also been released by them as a single-disc Blu-ray. Now the British label Second Run, which has long specialized in Eastern European cinema and previously released Zeman's BLÁZNOVA KRONICA / A JESTER'S TALE on DVD, has entered the picture with a glorious 4K restoration of what is arguably the filmmaker's greatest film, one that is tempting to interpret as a testamental work thought it perversely arrived well before the midpoint of his career: BARON PRÁŠIL / THE FABULOUS BARON MUNCHAUSEN (1961). 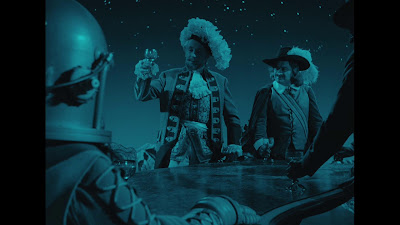 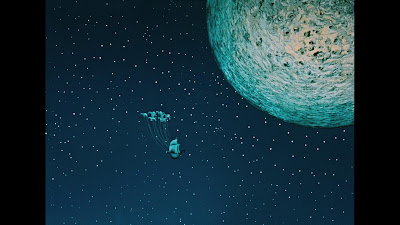 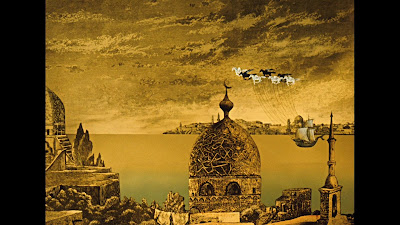 The tall tales collected in THE ADVENTURES OF BARON MUNCHAUSEN - based on the public exaggerations of a nobleman so named, written and published by Rudolf Erich Raspe in 1785 - were well-plundered by other filmmakers from Méliès to Josef von Baky by the time Zeman got around to filming them, so he took a unique approach. He saw Munchausen not as a figure to mock or ridicule, but to revere; he saw him as the avatar of all imagination and human invention, invention that would someday take us to the Moon. His film opens by taking us from our species' lowly origins beyond what was then the summit of our achievements, to the footprints of man on the Moon - footage now astonishing for how exactly it visualizes our documentation of scientific miracles now well in our past. There, the first lunar lander - identified only as Moonman or Tony (Rudolf Jelinek) - is surprised to be welcomed by the three protagonists of Verne's FROM THE EARTH TO THE MOON, by Cyrano de Bergerac, and Baron Munchausen himself (Miloš Kopeckÿ). These fantastical figures, romantics all, offer the Moonman the temptations of silver lunar wine and what appears to be a broom-riding space siren (and another, more beholden to science, held aloft by two balloons), but find him too pragmatic and earthly to believe in them. Therefore, they determine that it is on Earth where this adventurer truly belongs. The Baron escorts him back him personally aboard a great ship carried through space by a team of winged horses. Landing in Turkey, the Baron meets with the Sultan (THE CREMATOR's Rudolf Hrušinskÿ) for assistance, and in his great palace they discover that the beautiful - and remarkably passive - Princess Bianca (Jana Brejchová) is being held prisoner. (The almost three-dimensional shot entering the palace is probably one of my 10 favorite shots in all of cinema.) Both men are instantly enamored, but it is the Baron - for whom no feat is impossible - who asserts that she must be rescued and a kidnapping in the only manly means of doing so. 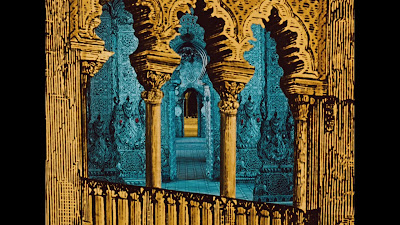 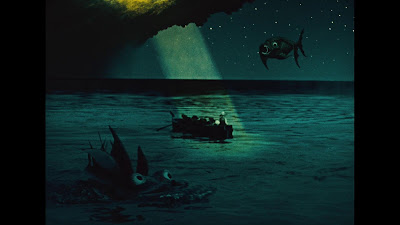 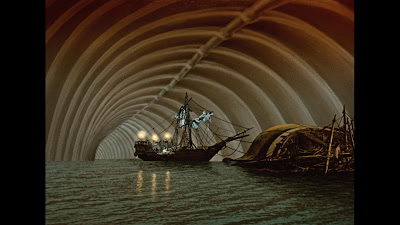 The balance of the film finds the three principal characters besting one outrageous jam by even more outrageous means, including being swallowed by a gigantic sea monster. But the actual drama of the piece is the urbane Baron's bafflement over the fact that the Princess prefers the unimaginative Tony to him as a suitor, in which one recognizes a philosophical contest between cold scientific logic and brave-hearted imaginative abandon. (The film also allows for a third reality, "the language of high democracy," which is spoken to and by rulers and politicians as so much meaningless blowing and slurring into a harmonica.) Without revealing too much, suffice to say that the pragmatist finds his way to dreaming through love and dreams up something that the good Baron can use to help them live happily ever after. The Baron, meanwhile, learns that romance may belong to the moon and the stars, but love itself is by nature an earthly thing. 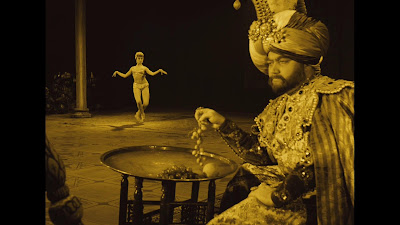 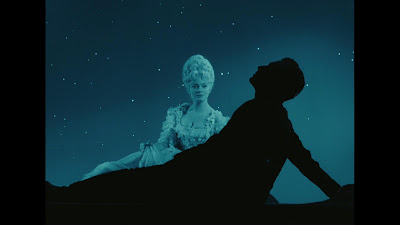 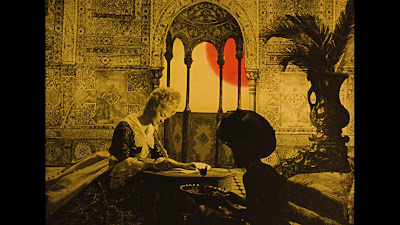 I am tempted to say that no film has ever benefited quite so much from 4K restoration as this one. The Czech Blu-rays were lovely, but this disc is razor-sharp with sometimes astonishing illusions of depth. The purity of the colors is awe-inducing, and I suspect that if the film was not so wittily grounded in humor, the work as a whole might be alienating in the sheer aggression and accumulation of its beauty. There are instances when the live-action components of individual shots look a trifle soft, but this has to do with how the shots were filmed and processed and layered. Second Run and the Zeman Museum have asserted the film's Czech nationality by presenting the film only with a Czech language track. In the 1990s, around the time Terry Gilliam (inspired in large part by this film) made his own ADVENTURES OF BARON MUNCHAUSEN, Image Entertainment released the Zeman picture on LaserDisc as THE ORIGINAL ADVENTURES OF BARON MUNCHAUSEN with an English-dubbed soundtrack, so completists may want to acquire this as well. 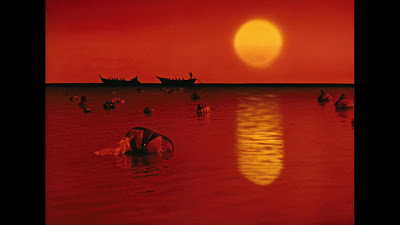 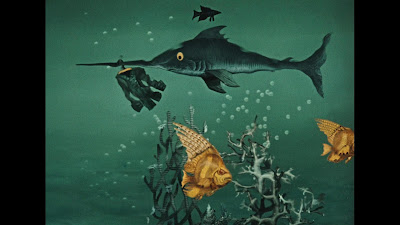 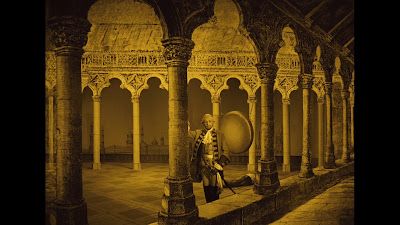 Second Run's optionally subtitled Blu-ray disc runs welcomely riot with nearly three hours of supplementary extras, the most important being Tomáš Hodan's 2015 documentary FILM ADVENTURER KAREL ZEMAN (102m), which includes interviews with the likes of Terry Gilliam and Tim Burton and many who knew Zeman personally. It is remarkable for the sheer plentitude of its behind the scenes footage - as one witness observes, Zeman had no fear of visitors peering into his techniques because there was nothing to steal but the intangibles of vision and hard work. It is a superb introduction to the subject, and exactly what you will want to see after the intoxicant of the main feature. It also documents a group of contemporary film students working together to recreate on film one of MUNCHAUSEN's most memorable illusions. Additionally, there are various essential documentary briefs ported over from the Zeman Museum releases, a nearly-half-hour spoken and illustrated essay by Michael Brooke about the real and fictional Munchausen and much about this film in particular (including a marvelous appreciation of Zdenēk Liška's endlessly inventive score), a trailer and a 16-page booklet featuring an informative and contextualizing essay by Graham Williamson.

Perhaps it goes without saying in light of all I've just said, but this is one of the most important HD releases of 2017 and warmly recommended. The region-free disc can be obtained directly from Second Run or from retailers such as Amazon.co.uk.