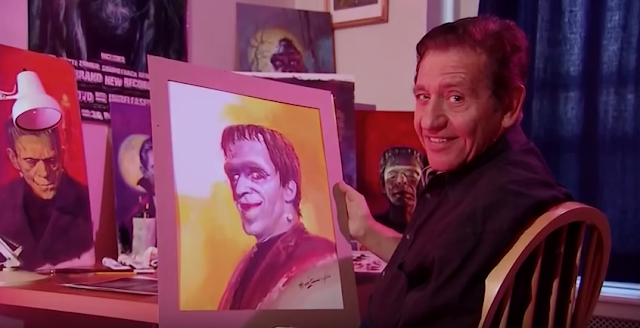 I swear to you, one of my first thoughts upon awakening yesterday morning was of the first time I met Basil Gogos. It was October 1994 and I was at the Chiller Theater convention in Secaucus, NJ, helping Barbara Steele with her table when I heard that Basil Gogos was down the hall, setting up his own table. I hightailed it right over there, found him setting things out on his table and speaking with an attractive younger woman seated behind it (I later learned this was his partner, artist Linda Touby); I grabbed him by the hand and told him that I had to rush over and tell him how very much his work had enriched my life. Out of the corner of my eye, I saw Linda smile and look down; I still don't know if she was smiling because she was pleased to see him so appreciated or amused because she heard this from everyone meeting him for the first time.

And now I've just heard that Basil has passed away the day before yesterday, September 13, at age 88 (though some Internet sources list him some 20 years younger), in time for him to have sent me that waking thought. No cause has been reported. 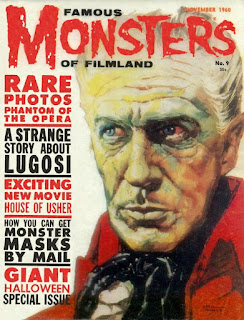 Though he was not the first artist to paint a cover for FAMOUS MONSTERS OF FILMLAND, Basil (then a veteran illustrator for men's adventure magazines) literally blazed the trail for horror and monster portraiture, single-handedly defining the glory of the painted monster magazine cover, turning images coined for exploitation into the finest of fine art - feral poses and bestial, skeletal faces splashed with all the colors of fright and passion. He began with the image of Vincent Price's Roderick Usher on the cover of FAMOUS MONSTERS OF FILMLAND #9, and - incredibly - though his artwork (sometimes recycled) appeared on fewer than 45 covers in the magazine's 25-year, 191-issue run, his work arguably defined the flavor and the potential of the magazine in ways its photo-heavy, juvenile interior could only hint at. He also provided covers for other Warren Publications, including SCREEN THRILLS ILLUSTRATED and SPACEMEN, but Warren seemed to tap him to launch new ventures rather than to sustain them.  Remarkably, he had provided only 15 covers for FAMOUS MONSTERS before there was an unexplained parting of the ways that led to his being replaced by the likes of Ron Cobb, Vic Prezio, Ken Kelly and various photo covers, and even some reprises of his covers (Claude Rains' PHANTOM OF THE OPERA, GORGO) on later issues. (Discovering how rarely his work actually appeared on FM's covers, in contrast to the seismic cultural impact they had, is like realizing that Christopher Lee appears for only eight minutes in HORROR OF DRACULA.) 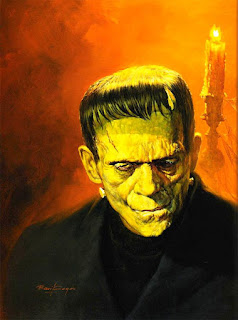 Upon the death of Boris Karloff in February 1969, Warren Publications wisely arranged for Gogos' return, and his elegiac portrait of Boris Karloff as the Frankenstein Monster for the cover of FM's Karloff Memorial issue (# 56) proved an instant classic. Looking back, in some ways, this cover and issue were my introduction to the mourning process and something in me, now, wants to relight its beautifully rendered candle for Basil.

The return of Gogos to the covers of FAMOUS MONSTERS was the beginning of a second and even longer streak of classic cover paintings: Jonathan Frid as DARK SHADOWS' Barnabas Collins; Fredric March as Mr. Hyde; Hurd Hatfield as Dorian Gray; Vincent Price in HOUSE OF WAX. But within the year, the magazine resorted to another recycling, this time of Lon Chaney's razor-toothed vampire from LONDON AFTER MIDNIGHT, FM's cover for #20 reformatted for #69. As fans, we patiently awaited the next Gogos cover. His last for the magazine came with an extraordinary portrait of Prudence Hyman as Hammer's THE GORGON for the cover of FM 179, in 1981. In a terrible lapse of judgement, a photograph of Arnold Schwarzeneggar from CONAN THE BARBARIAN was allowed to intrude upon and share the composition. 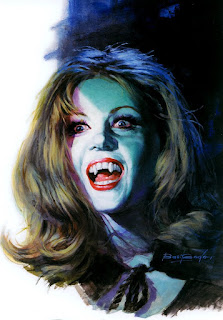 At the time I met Basil, he was doing covers for Steven Smith's fine new magazine MONSTERSCENE. I presented him with some copies of VIDEO WATCHDOG, and though he was later very complimentary about the content, we both had a chuckle when the first words out of his mouth were a disappointed "Oh, you do photo covers..." I have no idea what he was paid for his cover art, but - till the very last issue of VW - I always found the hardest job to be working out adequate compensation for our cover artists, because Gogos had instilled in me so much respect for that work. He was a soft-spoken, cheerful, and humble man and I wasn't prepared to insult him by making him an offer I considered to be far beneath him. His brushes had conjured so many of the contours of my young imagination; he articulated with greater skill than my young self could muster a real passion for the monsters I loved, and therefore taught me something of love and passion. His mastery of color prepared me to love Mario Bava. My favorite of all his works is his portrait of Ingrid Pitt, done for the cover of MONSTERSCENE; Ingrid was at that Chiller show too, and I know that she was deeply pleased and flattered by it. (How could she have felt otherwise, beholding the difference between a performance and a piece of iconography?) I was fortunate enough to have been standing there as she voiced her appreciation and he returned it by saying it was his great honor to work with such a beautiful subject.

Since his passing was announced on Facebook last night, I have seen countless postings on my news feed by artists who have said, in their own ways, much the same thing - and I realized from this outpouring of gratitude that Basil Gogos was not just a seminal cultural figure but a germinal one; he presented to us largely untapped territory that was there for everyone's future mining. And the most wonderful thing about this influence of Gogos is that everyone he inspired paints differently; no one really paints like him. Basil remains unique. What his students derive from his example is permission to paint monsters with love and empathy and joy and absolute freedom.

Valé to the great Gogos, who taught so many of us how to see in the dark.