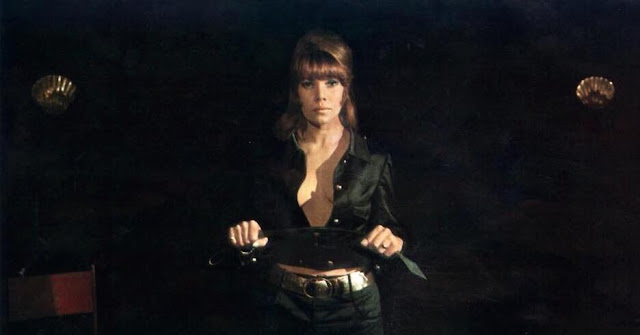 Farewell to one of the most iconic of Jess Franco stars, Janine Reynaud, who so imperiously embodied Lorna Green in his breakthrough film NECRONOMICON (aka SUCCUBUS) as Lorna Green (pictured), and was also prominently featured opposite Rosanna Yanni in the “Red Lips” entertainments SADISTEROTICA (aka TWO UNDERCOVER ANGELS) and KISS ME, MONSTER.

She also worked for directors Antonio Margheriti, Max Pecas, José Benazéraf, and Sergio Martino along the way, appearing in such films as KILLERS ARE CHALLENGED, CASTLE OF THE CREEPING FLESH, I AM A NYMPHOMANIAC, FRUSTRATION, CASE OF THE SCORPION’S TAIL and BLINDMAN (in which she plays a remarkably minor part, no more than an extra, but must have done so for the privilege of working with Apple and Ringo Starr). She was married for a time to her frequent co-star, the equally mysterious and bizarre Michel Lemoine - it’s unfortunate their undoubtedly fascinating story will remain untold - and later retired to Texas while he remained in Paris.

Au revoir, Madame - and thank you for the fantasies.
Posted by Tim Lucas at Wednesday, May 16, 2018

DEATH SMILES ON A MURDERER Previewed 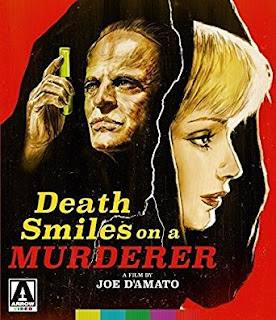 It has happened once or twice that I've come aboard a project as audio commentator not quite knowing in advance what I'm going to bring to it, but feeling an intuition I should proceed. Such was the case with Arrow's DEATH SMILES ON A MURDERER, directed in 1973 by Joe D'Amato under his real name of Aristede Massaccesi. This afternoon, I zoomed through an advance screener - not as in "fast-forwarded," but as in "enraptured." I am so proud of this whole package, I could burst.

It wasn't a movie I knew well and, to be perfectly honest, I'm not a big D'Amato fan, generally - but when I revisited DEATH SMILES before making my decision to sign on, I sensed that it was not an opportunity to be missed. To my surprise, I could see something in it that I immediately felt a need to share with other people - not unlike why I'm posting this blog entry today. Almost as soon as I started working on the commentary, I felt a strange alchemy at work that was undoubtedly brought on by Berto Pisano's score, one of the most spellbinding in Italian horror; I found myself responding to the film's images and their poetry rather than their meaning or their production history minutiae. It was unexpected and delightful.

I couldn't be happier with the extras. Kat Ellinger has contributed a marvelous video essay on the full breadth of Joe D'Amato's work, a much-needed addition to the package; then there is also a brief archival interview of D'Amato talking about the film, about 5m long. My commentary is more of a shot-by-shot "reading" of the film, an appreciation and analysis of the film itself, rather than a documentation of the filming, though I cover some of that, as well. I think I took a step up with this one. But the icing on the cake is a 40+ minute camera interview with the elusive Ewa Aulin herself.

Not at all what I expected, Ewa is not one of those fashion models who puts her nose in the air and dismisses her genre films. No - she dismisses the fluff like START THE REVOLUTION WITHOUT ME! It's the genre films she understands, appreciates, and articulately defends as works of art! She loves Tinto Brass and Giulio Questi and she speaks  speaks warmly and with engagement about working with D'Amato, too! I was completely charmed by her; I could have listened to her talk all night! She is the epitome of a cultured European artist and audience - and the tomes on the bookcase behind her during the interview, thick books on the visual arts, only support this.