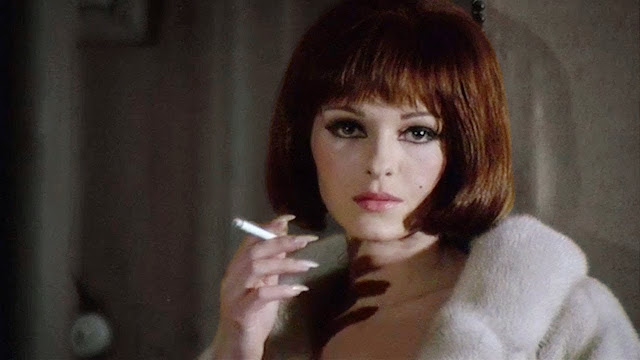 Earlier this week, word came of the passing of Austrian actress Maria Rohm, who had starred in numerous films produced by Harry Allan Towers, whom she married in 1964. In her earliest films - THE MILLION EYES OF SU MURU, THE VENGEANCE OF FU MANCHU, THE HOUSE OF 1000 DOLLS - it must be said that she did not make much more than a picturesque impression, but when Towers began working with Jess Franco in 1968, she became a primary focus of the films that followed - 99 WOMEN, THE GIRL FROM RIO, MARQUIS DE SADE'S JUSTINE, and most particularly VENUS IN FURS, EUGENIE... THE STORY OF HER JOURNEY INTO PERVERSION, and COUNT DRACULA, in which her roles became exquisitely tailored to her capabilities. Since her husband's death in 2009, Rohm - whom he called "Schnitzel" - lived in relative seclusion in Toronto, and dealt with recurring bouts of ill health. In 2013, she arranged for Bear Manor to publish her husband's autobiography MR TOWERS OF LONDON: A LIFE IN SHOW BUSINESS. I was fortunate enough to befriend Maria through Facebook for several years, and it was a pleasure to witness her pleasure at seeing her work discovered and appreciated by new generations on DVD and Blu-ray. She was 72. 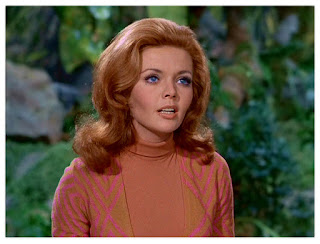 Farewell also to actress Deanna Lund, best-remembered as a cast member of Irwin Allen's LAND OF THE GIANTS, though she was also a frolicking bikini girl in STING OF DEATH, one of the androids who marched out of Dr. Goldfoot's Bikini Machine, the temptress known as Tuff Bod who lured spy Jonathan Daly in the cult classic OUT OF SIGHT, Anna Gram - the moll to John Astin's Riddler on BATMAN, and a passing gleam in Elvis Presley's eye in two of his movies (PARADISE HAWAIIAN STYLE and SPINOUT). She also worked with Jim Wynorski in TRANSYLVANIA TWIST. So much Baby Boomer pop culture packed into a shapely nutshell, she was 81.