My New Book Available for Pre-Order! 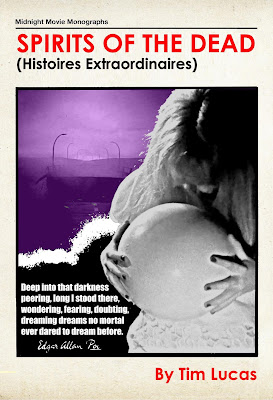 I'm happy to announce that PS Publishing is now accepting pre-orders for my Electric Dreamhouse "Midnight Movies Monograph" on SPIRITS OF THE DEAD (Histoires Extraordinaires), the Edgar Allan Poe anthology directed by Roger Vadim, Louis Malle, and Federico Fellini. It is my first book in ten years, since the release of my book on VIDEODROME in 2008.

PS Publishing/Electric Dreamhouse, of course, is the partnership that recently brought you the marvelous WE ARE THE MARTIANS: THE LEGACY OF NIGEL KNEALE, in which I was pleased to be involved. This new release is nicely timed to coincide with the 50th Anniversary of SPIRITS OF THE DEAD's first public releases in Europe in the Summer of 1968. I'm glad to say that the film seems very much to be "in the air" - just last night in Neuchatel, Switzerland, David Cronenberg introduced a stand-alone screening of Fellini's segment "Toby Dammit," starring Terence Stamp.

The previous releases in the MMM series have been about 112-118 pages in length, but editor Neil Snowdon encouraged me to follow my heart with this one, and the final result is more than twice the usual length at 232 pages - yet the cover price remains the same! The book is fully illustrated, draws upon interviews involving each of the principals, and for easy reference, it includes the three Edgar Allan Poe tales ("Metzengerstein", "William Wilson" and "Never Bet the Devil Your Head") that formed the film's basis, annotated by me. The text is a love letter of documentation, shot-by-shot commentary, criticism, biography, videography - and autobiography. Yes, I said "shot-by-shot"; I wrote my analysis of the film using much the same technique as I apply to my audio commentaries. I must say, I wrote this book in a white-heat of sustained enthusiasm, and I believe it ranks with my best work - and it may well be my most inspired.

For my money, "Toby Dammit" is one of the greatest films I've ever seen, but I don't follow the common line of thinking that the other two segments are without merit. The more I wrote about the three distinct episodes, the more I came to see that SPIRITS OF THE DEAD really does function as a whole and rewards being viewed in that way. I also discovered that each of the three directors who contributed to this film made their episodes at what was perhaps the most decisive points in their lives and careers, and I discuss these fascinating points as well. Significant space is also given to Orson Welles' rejected script for the film, a proposed amalgam of "The Cask of Amontillado" and "Masque of the Red Death."

In case you're wondering "Is there a definitive version I should watch before reading?," the answer is an emphatic YES! Buy this Blu-ray and watch the English version. (The discoffers French and Italian options, as well.) DON'T watch the French version currently circulating on Filmstruck's Criterion Channel and TCM. Well... actually, Louis Malle's "William Wilson" segment is safe to watch that way - definitive, in fact - but the other two framing episodes must be watched in English, as only this version preserves the vocal performances of Jane Fonda, Peter Fonda, and most importantly, Terence Stamp. Jane and Peter did their own voice work in French, but the French version now circulating bears the original export title TALES OF MYSTERY AND IMAGINATION rather than Histoires Extraordinaires - meaning that the French sound has been synced to the English visual track. Briefly stated, the results are sometimes jarring and not to the film's benefit. I explain this in more detail in the book.

As I say, it's been a full decade since my previous book, so please consider pre-ordering your copy now. If my publishers see that I have a responsive and plentiful readership, they may just decide to bring you more books by me!