For the Love of Toho 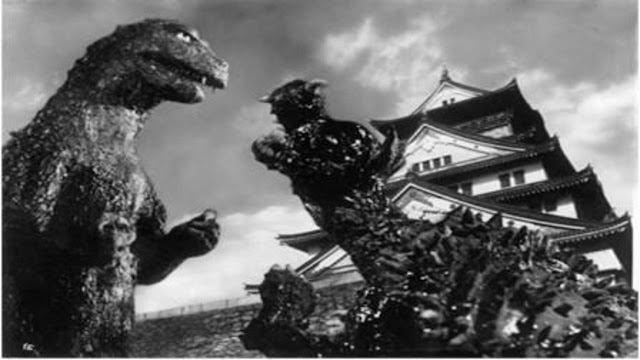 Sometimes people ask me why I don't write more about Toho’s kaiju eiga ("monster movies"). I tell them that, yes, it has mostly been a deliberate choice, but it's also true that I've been a fan of these films for almost as long as I can remember. I saw KING KONG VS. GODZILLA on its opening weekend at Cincinnati's Twin Drive-In Theater, and when the Big G hatched out of his glacial burial place, I actually recognized him as Gigantis, the Fire Monster - which I had seen not long before on a local afternoon broadcast of the movie now known as GODZILLA RAIDS AGAIN. I got to see on the big screen virtually all of the Toho films that enjoyed a US release in the 1960s, and as a teenager I bought copies of Greg Shoemaker's fanzine THE JAPANESE FANTASY FILM JOURNAL - facts that place me squarely in the vanguard of this subculture, but it's true that I've shied away from writing too much about them - for the simple reason that so much about these films - the filmmakers, the stars, and much about Japanese history and culture - has always seemed inaccessible to me.

In the 1990s, when I was acquiring some Japanese laserdisc editions of these movies, I couldn't resist reviewing a brace of them at length for VIDEO WATCHDOG's second SPECIAL EDITION. Afterwards, I received a nice letter from future Eiji Tsubaraya biographer August Ragone, who congratulated me on writing one of the most best pieces about the Toho films that he had read in English – and then he directed my attention to a six-page post-script appended to his letter, consisting of additional notes, corrections and clarifications, in case I or my readers might be interested. I was - very much so - but I never printed this document as a letter because a) there never was a third SPECIAL EDITION, b) a six-page document is an article and not a letter, and c) it tended to annotate what I had written for what I did not say, rather than for what I said.

This caused me to realize that, for anyone undertaking to write about these films in English, they can either do so with the understanding that they working on the surface and only addressing that share of Toho's audience that has never evolved beyond the sheer sensation of the films, or they can presume to dig deeper, to a place that quite possibly has already been mined by someone with a more thorough understanding of these films in all their details than the writer. I respect scholarship, so I respect this. I reserve my right to have and to express an opinion, to read and interpret this material in a hopefully unique way, but I respect - and am somewhat wary of - what lay beyond this line.

A few nights ago, I found myself suddenly, madly, impossibly restimulated in my interest for Toho productions. I don't want to say anything about the specific cause, because I'm writing a feature article about it for a certain well-known magazine. Suffice to say, Toho is ingenious in its ability to market its goods and keep their loving audience on a hook. A passion for Toto is inevitably costly. Fortunately for sudden revived obsessions like mine, I have been keeping my collection on DVD and Blu-ray mostly up to date, over the years, so there is plenty here for me to binge upon. The last few nights, I've been doing just that, and here are some thoughts on those recent viewings. 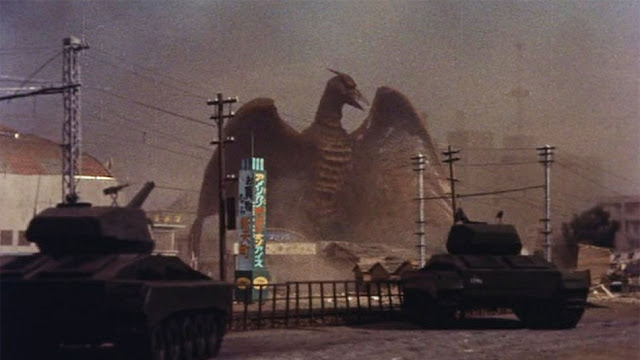 RODAN 1956 /
US release 1957
The original Japanese version is a far more somber affair than the English dub, which has its own unique merits. The muted but still rich color, and the immense varieties of texture, are beautiful, as is director Ishiro Honda's conveyance of the value of human life, respect for science, and awe of the inexplicable and miraculous. I was surprised to hear some of the earliest spoken lines were on the subject of climate change! Fearsome and mysterious here, Rodan would never solely carry another film again, and never receive quite the same respect in its many screen reappearances. Yet even this film doesn't fully indulge Rodan with the stardom this monster deserved. More than half the movie, it seems, is taken up with the discovery of the dragonfly grubs - which, in a Lovecraftian touch, turn out to be the larger monster's food. This nevertheless remains an admirable film.

VARAN THE UNBELIEVABLE 1958
US version 1962
As a late friend of mine once said, "I've seen VARAN, and he's pretty unbelievable." This is not one of Honda's better films, even in its original state, as he himself freely admitted. But the English version, starring an even more unbelievable Myron Healy, is an abomination. It doesn't dub the original film so much as subsume it; the pittance of Japanese footage that is left is presented in Japanese, leaving the bulk of the film to a bare-bones US cast, with Healy - as Commander James Bradley, living in an island hut with compliant wife Tsuruko Kobayashi - swaggering around, acting to camera with his "best side," and issuing world-saving orders to Japanese-American extras. The whole pan&scanned mess runs just over an hour and has the audacity to cut a good deal of actual monster footage, including Varan's flying scenes. (For what it's worth, the monster itself is terrific, with an unusually convincing reptilian demeanor.) What remains is appallingly condescending and patronizing, not only to the Japanese people but audiences in general. I watched this on Amazon Prime, where the price is right at "free." 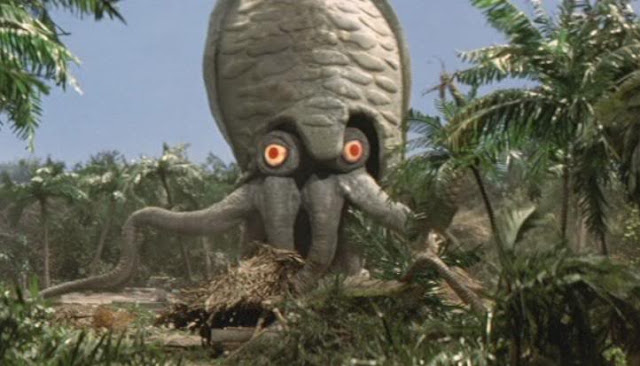 SPACE AMOEBA 1970
aka YOG, MONSTER FROM SPACE 1971
Though directed by Ishiro Honda, this was the first special effects film produced by Toho following the death of spfx supervisor Eiji Tsubaraya. While it doesn't tell a story that feels particularly new - indeed, it seems to have been written around a list of reliable tropes established by earlier films from the studio - this is not as dispensable as you might think. It is a fairly entertaining piece of pulp entertainment, aimed squarely at pre-teen audiences of the time, and the classic Toho production values are still in evidence, as they would not remain for much longer. The SPACE AMOEBA version, which I also watched on Amazon Prime at no cost, is the complete widescreen Japanese version, presented in its original export English dub, which was evidently recorded in Australia. When American International acquired the film for US release, they snipped a few minutes off the running time and had the film completely redubbed at Titra in New York. 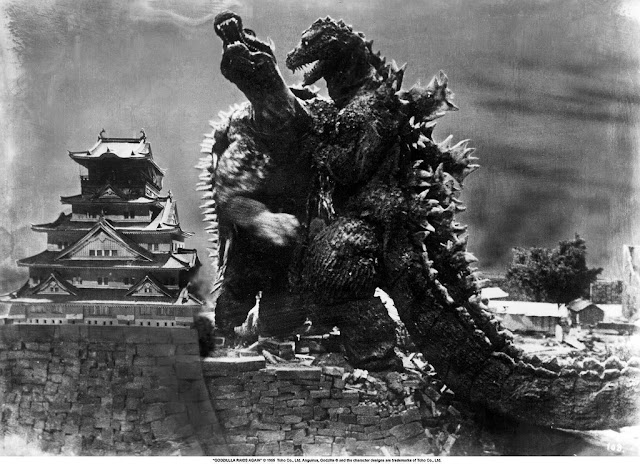 GODZILLA RAIDS AGAIN 1957
aka GIGANTIS THE FIRE MONSTER 1959
Last night’s trip back to Toho land was courtesy of Classic Media's Media Blasters DVD, which includes both versions of the main feature and an audio commentary by future Ishiro Honda biographer Steve Ryfle and friends. The first Godzilla sequel, this is not an Ishiro Honda title. Directed by Motoyoshi Oda, it’s somewhat unusually constructed, introducing its two monsters (G and an ankylosaur adversary, Anguirus) already in the midst of battle, yet emphasizing its human characters throughout. As a kid, I remember loving Kobayashi (Minoyu Chiaki) and feeling sad when he met his ultimate fate. There is a refreshing, robust air of friendliness, of good fellowship and a humanistic approach to business and duty in this picture that we would do well to learn from. Ryfle's commentary was knowledgeable, a little on the snarky side at times but I can’t say the meddlesome English version was undeserving. It also delves into the interesting pre-history of the US version, which was to have been written by Ib Melchior and called THE VOLCANO MONSTERS. The track also features the input of fellow biographer Ed Godzisziewski, GODZILLA authority Stuart Galbraith, and a Bob Burns cameo in which he recounts the day that he and Paul Blaisdell “met” Godzilla. Worth hearing.