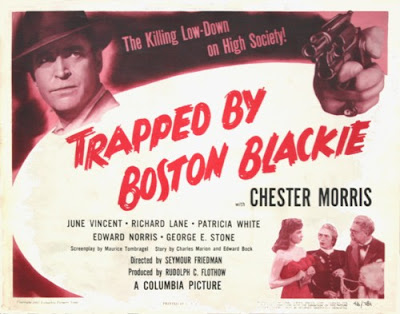 In June 1947, Chester Morris found himself a participant in an unusual cast. He was - depending which news item you read - either entertaining neighborhood children or jitterbugging with his wife when he slipped and fell, fracturing his right leg in two places. While laid up in bed for two months with his leg in plaster, he spent his time by developing a magic set for children, which was marketed at a cost of $10. In the penultimate Boston Blackie film, TRAPPED BY BOSTON BLACKIE (1948), we can see the toll that Morris' enforced rest took on him; he looks noticeably older, a bit bloated, and walks differently - indeed, a recent injury is noted in the dialogue.

Almost certainly the most lackluster of the series' fourteen entries, TRAPPED plays like what it actually was to Columbia: training ground for a new director (in this case, Seymour Freidman). It tells a consistent, if over-complicated story, and seems to have been assembled from pieces filmed and played in different ways. Consequently, the results are hit-and-miss. While magic doesn't play a role in this story, disguises continue to take the place of wit and natural charm. Following the apparent road accident death of the head of a small private detective agency, a close friend of Blackie's, his widow is persuaded by our hero to keep the agency going by hiring a couple of reliable ex-GI friends (we never meet them - the suggestion is made in the spirit of a positive post-war suggestion for small business owners everywhere). In the meantime, he and the Runt agree to help the widow during this period of transition by going to a costume party that her late husband was to attend, to keep an eye on the precious heirloom pearl necklace the hostess intends to wear during a private dance recital for her friends. Blackie and the Runt attend the party disguised as a pair of bearded Indian mystics and, naturally, the necklace is stolen... and naturally, Inspector Farraday arrives to oversee the searches of all the guests... and naturally, Blackie and the Runt are recognized and have to make a graceless exit, making them look guilty. While on the lam, they pose as the elderly parents of the theft victim's niece (June Vincent), gaining her confidence. Yes, the Runt's in drag again, but oddly enough, this ruse isn't played so broadly for laughs as in earlier entries.

The remainder of the story connects the theft to Igor Borio (Edward Norris) and his business partner Sandra Doray (Fay Baker, who steals the film in an unusually flinty female role for this era - she may be the only actor in the entire series who fires a gun with actual authority). They run a dancing school Blackie tries to infiltrate while wearing yet another disguise, a ploy that adds nothing to the film but manages to eat up a good ten minutes before it is seen through and just as casually discarded. Even with its heavy-handed emphasis on disguise, the tone of the overall piece is more sober than usual; George E. Stone is likewise unusually dour, with the Runt only working up one of usual neurotic spells during a brief, atmospheric visit to a graveyard. Regrettably, this was Stone's last appearance as the Runt. Director Friedman, who would also direct the series' swan song BOSTON BLACKIE'S CHINESE VENTURE (1949), a couple of B-movie entries in the Crime Doctor and The Saint series, and Columbia's THE SON OF DR. JEKYLL (1951) before settling down as a production supervisor on numerous classic television series. 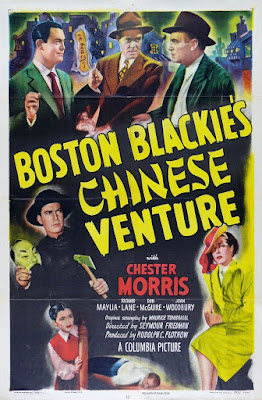 I've often wondered about the title of this film. Why VENTURE rather than ADVENTURE? Why the unusual stressing of the word CHINESE? Ultimately, none of this matters.

Happily, the last film in the series is a pleasant surprise if one can get past the jarring discontinuity of Sid Tomack replacing George E. Stone's in the key role of The Runt. (Tomack has Stone's Runyanesque qualities, but he's much less of a comic actor than Stone, is harder to accept as a retired criminal, and isn't all that short. It's interesting that both actors would play criminal roles in the imminent ADVENTURES OF SUPERMAN series.) Set in New York's Chinatown district - making this more of a Chinese-American venture - this script by Kentucky-born Maurice Tombragel (HORROR ISLAND, MOON PILOT) details the smuggling of stolen recut diamonds in special boxes of tea being sold from under the counter of a Chinatown tourist trap Orientalia shop. The younger salesman in the store is played by Benson Fong (who was newly married to the film's heroine, Maylia), and the shop is just down the street from a movie theater where tickets are being torn by his younger brother in the Charlie Chan series, Victor Sen Yung!

In fact, what is most impressive about this film is its most uncommon attention to employing only Chinese-American actors to play Chinese-American roles. It takes care to depict them as a deeply moral and responsible people who act honorably (yet not without humor) toward their fellow men and whose area of town boasts almost a complete absence of crime and delinquency. This is remarkable for a post-war American B-picture made at a time when most Americans could not distinguish Chinese from Japanese. In fact, there is a sub-story about a tourist bus tour of Chinatown that gently mocks paranoid American curiosity about such places, which the local Chinese are amiably exploiting to their benefit. The crooks in this venture are 100% American and the one compromised Chinese-American character, though arrested, is almost guaranteed clemency as a victim of the ruse.

Chester Morris looks appreciably healthier here than in the previous film, though an unnecessary comment is made about his unnoticeable "funny walk." There is welcome relief from gratuitous magic tricks and there is only one funny disguise sequence, cleverly and usefully integrated into the story. The script also makes a tacit apology for its past depiction of the police force as being dumb as a bag of hammers. On their last go-arounds as Inspector Farraday and the witless Sgt. Matthews, Richard Lane has lost none of his forceful authority and Frank Sully finally gets to look like he's starting to wise-up. But never fear: he's still capable of making monumentally pointless observations like "Chief, I'm beginning to think there is more to this case than meets the eye." By far the strangest turn of events in this moderately atmospheric quickie is a failed camera trick seen when Blackie dodges police pursuit by ducking into a Chinatown movie theater. Once inside the darkened theater, where a film is in progress, the entire audience is painted black to make the setting that much darker... but the result of the effect backfires, because their eyes look luminously white in contrast! What were they thinking? 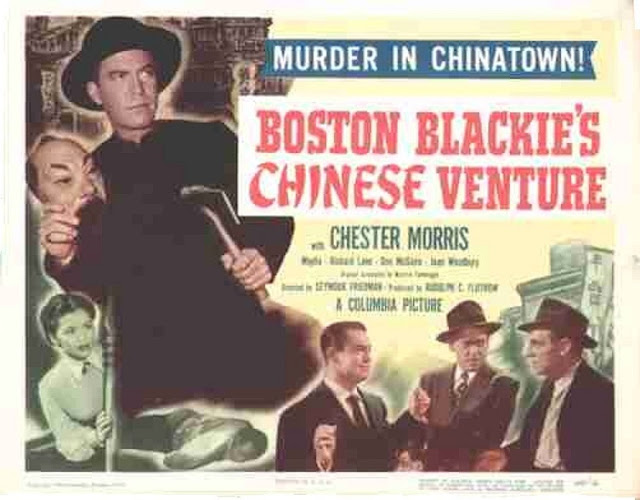 BOSTON BLACKIE'S CHINESE VENTURE ended the nearly decade-long series, but through no specific fault of its own. 1948 had also seen the last of Columbia's Whistler series, while 1949 saw the end of Columbia's Crime Doctor movies, just as Monogram Pictures put an end to producing their Charlie Chan pictures. Of course, the stars of these series - silent film leading men all - were starting to show their age. More importantly, the movie game itself was changing; studios were beginning to see the wisdom of putting yesteryear's A-titles into the supporting feature slots previously held by original B-picture production. Boston Blackie, like Charlie Chan and The Whistler, continued to thrive on radio for the time being and was subsequently developed for television with Kent Taylor in the role.