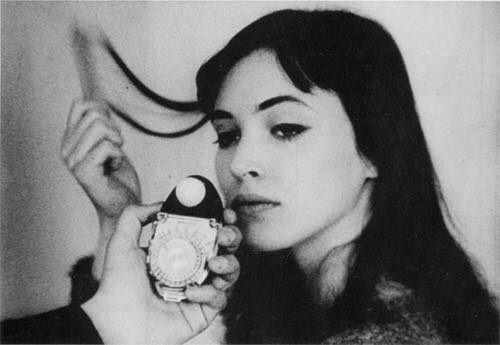 In the wake of Anna Karina's death two days ago at the age of 79, I’ve been wondering what I might say about her that would be as meaningful as she was to me. Of late, I’ve been reading THE NEW NATURE OF THE CATASTROPE, a collection of "Jerry Cornelius" stories by Michael Moorcock and other writers, and somewhere in the book someone, possibly Brian Aldiss, observes that Jerry Cornelius was more of a technique than a character. I believe the same could be said of Anna Karina; she didn't play characters so much as she brought a particular and utterly exclusive color to a picture - and yet she was all women. To be more precise, she was a tone, a fantasy, an insight, a line of poetry that could be applied to all women, or at least the one who, at a given moment, you might love. 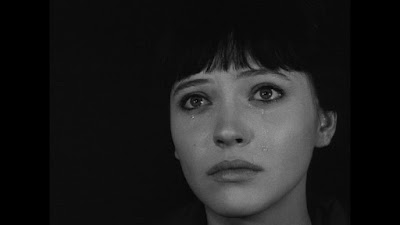 Last night, for the first time since I finished my audio commentary for it, I looked at Kino Lorber's Blu-ray of ALPHAVILLE and noticed two things I should have mentioned. First, even though the information is given about her and Eddie Constantine earlier in the track, I wish I had pointed out once again at the end of this movie about the power of words that both she and Eddie went on to write novels. This is an almost miraculously rare detail in cinema. And secondly, I wish I had noted something that Jean-Luc Godard seems to have discovered about her first, and perhaps exclusively: that she was that rare actress who was inherently cinematic. Her face, her expression, her forming of words needed no editing to make her magical. There was something about her that seemed to resist, if not defy, editing. Most actors' performances have to be guided, shaped, even created in the editing. 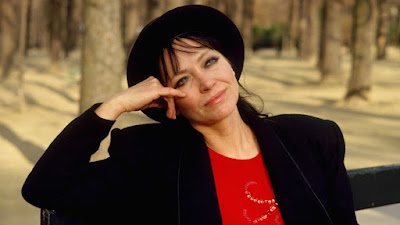 She was a true fauna of the cinema, a reliable source of truth and light in darkened auditoriums. For as long as her movies survive, generations to come will be able to see and understand in a single throw what we boomers perceived as cinema.