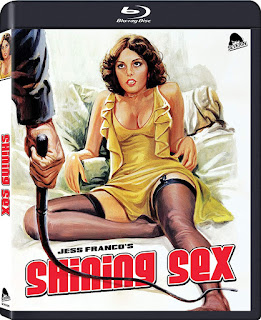 SHINING SEX (1975, Severin Films): Behind this brazen exploitation title is one of Jess Franco's few forays into science fiction and a study in what we would now term "body horror" surprisingly contemporaneous with David Cronenberg's feature directorial debut SHIVERS aka THEY CAME FROM WITHIN (1975).

Made back-to-back with MIDNIGHT PARTY, a fourth-wall breaking spoof of the autobiographical porn star films being made at the time, this one stars Lina Romay in the similar role of Cynthia, an exotic dancer whose personal services are procured for a private party by a mysterious couple named Alpha and Andros (Evelyne Stewart, Ramón Ardíd), who turn out to be a visiting alien and a human under her hypnotic control who functions as her "Morpho," or servant. In an eerily clinical blending of storylines from THE DIABOLICAL DR. Z (1966) and SUCCUBUS (1968), after experiencing earthly sex with her captive (whose steep learning curve for the alien woman provides most of its dramatic interest), Alpha applies an otherworldly lotion to Cynthia's shaved genitals (observed in loving close-ups), then turns her loose on the three known people who have been psychically sensitive enough to discover her presence on Earth, who happen to be a female mystic (Monica Swinn), anthropologist Dr. Kallmann (Olivier Mathot, who has taken to hiding somewhere remote, "maybe Africa"), and the wheelchair-bound scholar Professor Seward (Franco himself), a wheelchair-bound scholar.

Though not technically hardcore, SHINING SEX will pose certain problems for those viewers who shy away from gynecological detail, which is fairly persistent and in a strange way actually enhances Romay's character's sense of innocence and vulnerability. While the film has its ups and downs (the latter including a lengthy portion of the film that documents Cynthia's pursuit of Dallmann on a boat that essentially circles a small harbor before returning to the exact same spot!), there are moments when an inexplicable and stunning magic suddenly takes hold. In Cynthia's death tryst with the mystic Madame Pécame, the imagery suddenly locks in a perfect and uncanny iconography, and in the long, silent penthouse scenes involving Cynthia and her two captors, Franco achieves a sustained mood from no-budget elements which evokes memories of the more costly alien scenes shot for Nicolas Roeg's THE MAN WHO FELL TO EARTH (released the year after, 1976). The title is derived from a side-effect of Cynthia's bodily contamination, which gradually causes her nubile form to erupt in sparkling cells of disease and contagion, what a character in Val Lewton's I WALKED WITH A ZOMBIE called "the glitter of putrescence"- as arresting an image of lethal contagion as you can imagine. As ever, Romay gives herself body and soul to Franco's camera, and sometimes, at the dramatic height of a moment, you can believe you see her eyes searching out his. It's said that it was during the making of this film that their professional relationship took its fateful, more personal turn.

Severin's Blu-ray disc (2:39:1, English mono) is far better-looking than the various grey-market sources that have been kicking around, but the source element has its limitations, including a little too much cyan in its color grading which turns the pure reds ever so slightly purple. The audio is limited to a cheesy English-dubbed option (previously available only on a Japanese VHS release), which is rare but undoubtedly less ideal than French with English subtitles would be; that said, the disc does offer English-speaking fans the opportunity to focus solely on the images, which are a sometimes fascinating mélange of the spellbinding and the uncomfortable. The extras include the third in an illuminating series of locations visits with Franco expert Stephen Thrower (who goes to Madrid, visits actor Antonio Mayans, and gets to cradle the urn holding Jess' cremains), who also lectures on the film in a separate featurette; interviews with French filmmaker Gerard Kikoïne (who edited several Franco films without ever meeting the man); Eurociné producer Daniel Lesoeur; and BROTHERHOOD OF THE WOLF director Christophe Gans, who speaks at length and with great passion about how and why he became an admirer of Franco's work. There is also an audio commentary provided by I'm In A Jess Franco State of Mind blogger Robert Monell and Naschycast host Rod Barnett, which makes this bounty of supplements a pleasurable evening of its own.

The cover makes erroneous mention of an included audio CD of Daniel J. White soundtrack music that was actually included solely as part of a pre-order package (if you missed this, check eBay and pay dearly), but this is nevertheless a great and nutritious bounty of content added to one of Franco's most notable later films. I remain hopeful of an English-friendly French release some day, but even if you're half the Franco fan I am, this is an essential and rewarding package.

If you enjoy Video WatchBlog, your kind support will help to ensure its continued frequency and broader reach of coverage.